Roma’s Champions League ambitions start to slip after a 1-1 draw in Genoa at the Stadio Luigi Ferraris. Roma came into the game with great momentum and confidence having been unbeaten in their last five games. Sunday afternoon Roma that continued in a match that felt like more of a loss then a point earned. Following Atalanta’s 3-1 win over Lazio. Roma had the pressure of winning the match anything less would have allowed Atalanta to create separation in Italy’s final Champions League spot. It was the worst time for Roma to start to slip. Among all the teams chasing Champions League football Roma had the most winnable schedule out of all of them. However, right on schedule, inconsistent Roma made itself known once again. Genoa is a team that has not won a game since March 17th and has been in a horrid run a form as relegation is still possible. It was a game Roma truly should have had no problem winning they should have a ripped through them even though the match was in Genoa which at times can be a very difficult place to play they just did not do enough to earn the three points that they desperately needed. It was a tough battle Genoa were on the front foot in the first half despite several chances. Roma failed to convert as Federico Fazio came close in what was a goalless first half. In the second half, Roma showed much more poised as they regained control. With 8 minutes ago Stephan El Shaarawy scored the would be winning goal as it appeared that Roma would be taking the three points back to Rome with them. However, at the brink of death Christian Romero equalized. Then moments later Genoa won a penalty as Genoa had the opportunity to steal one from Roma but goalkeeping heroics from Antonio Mirante avoided a late collapse. Despite earning a point it was a game in which Roma simply did not do enough as their Champions League ambitions are under serious threat as they now find themselves three points from it.

It has been the best run of form for Roma this season. After a few weeks ago against Napoli, it looks like Roma were not even going to make the Europa League. Roma has actually turned the corner in a strong month of April finding themselves unbeaten in all five matches including three victories. It had really looked like Roma had everything going for them the ability to make the Champions League would have capped off what otherwise has been a disappointing season. Even before Sunday, they had an opportunity of stealing third place from Inter Milan. Everything was going for them all they needed to do is win the games are expected to win. As I said from the very start about a month ago Roma can only drop points in two games. They drew even with Inter Milan that was a game I was the most worried about outside of that I didn’t think Roma would have that many problems with the remaining schedule. A draw Sunday seriously damaged their chances of making the Champions League. Atalanta has now opened up a three-point lead ahead of Roma in 4th not to mention there are several teams that are not too far behind. The worst part of all this is a host Juventus next weekend even though they have literally nothing to play for with the league title already having been wrapped up they are not going to lay down for Roma. Could they get a point from Juventus sure could they win possibly but after failing to beat a team who has not won a game since the middle of March in a Champions League season that has been as tight as ever. Their schedule favored Roma they looked like these favorites to win that spot but after losing points Sunday it looks very unlikely that they will be able to attain their Champions League expectations. Regardless of how bad it has been this club is expected to make Champions League year in and year out. They might have just well of cost to themselves that Sunday.

Earlier this week it was reported that Juventus have agreed to terms with Genoa left-backs Christian Romeo. A talented player but someone I was proved so wrong about on Sunday afternoon. Juventus has a big club that needs to be challenging for the Champions League every season. They need particular players for them to reach the expectations that has put on their backs. When you have that history and you’re expected to at least at the very minimum make the semi-finals you need certain players that can get you to that level. I questioned whether Christian Romero was Juventus quality. I’ve always liked him he’s a very incredibly talented player but my assessment before Sunday was he wasn’t quite Juventus quality. I was proving so wrong about that after his display this weekend. He was Genoa’s  best player and influenced the game .He proved to be a threat every time you touch the ball. I wouldn’t go as far as to say he was the best player on the pitch but without question he is Juventus quality something I was very wrong about. He nearly scored right before halftime. Not to mention he was apart of a backline that shut out Roma for 82 minutes. Roma have star power all over the place so that is quite an accomplishment in itself especially given their defensive tactics in the match. He scored a perfectly-placed header coming off a corner in the dying moments of the match. He is a big game player he was just special yesterday and there’s no question he can be a serious threat for Juventus next season. On a big stage against a strong team he delivered. As he earned himself and his team a crucial points in their Battle of relegation. He is far too good to be on a team fighting for their lives that was evidently clear yesterday. 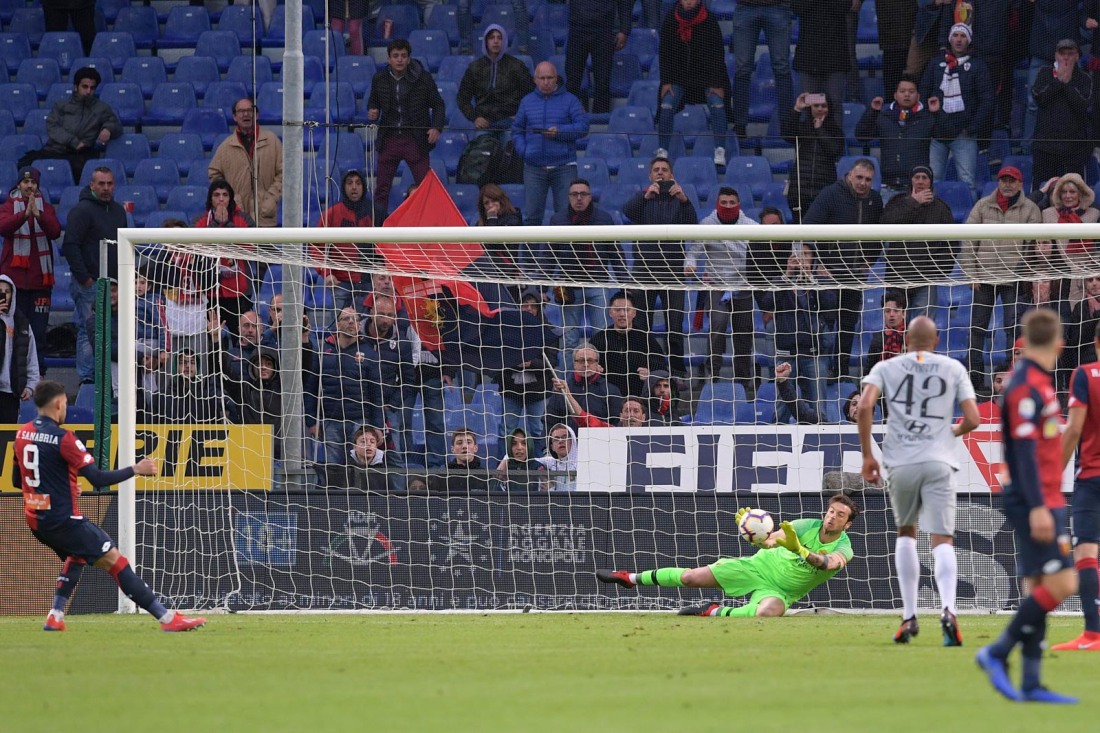 Genoa blew a great opportunity late in the match yesterday that would have almost certainly confirmed their safety in Italian football. While I think it’s quite obvious that they are still unlikely to be relegated it was a true opportunity to confirm that. When you’re one of these teams in at that part of the table where relegation is possible you want to have the opportunity to confirm safety. That’s exactly what they could have done in the dying minutes yesterday. Roma conceded a penalty on what was the last kick of the game. As Antonio’s Sabrina was brought down in the Box at the death of the match. From 12 yards out he had the chance and the opportunity to almost certainly confirm safety in what would have been a total and utter collapse for Roma’s Champions League ambitions. It was right there just sitting for them but Antonino Mirante denied Antonio Sabrina’s penalty at the very end of the match. It is a result Genoa can certainly be happy about but it had a bitter taste in the end after their inability to finish it off. Genoa in all likelihood will confirm safety sooner rather than later but this was an enormous chance to get that monkey off their backs and they just failed to do so.

Good But not Good enough

Roma did extend their unbeaten run to six games but this is not looked at in a good way. I think a draw completely reflects the match itself. Even though a six-game unbeaten run can be really difficult at times they just weren’t good enough on Sunday. Roma went into this game without a loss in over a month. They showed confidence and momentum over the last few games and we’re starting to look like the favorites to secure Italy’s final Champions League spot. Regardless they seemingly managed to blow it. They lacked that Cutting Edge it was a less than encouraging performance. I’m not going to step on their neck because of their display because they did a lot of things well. Had they done a few more things well there’s no question that Roma would have won this game. There are many aspects in which Roma can look at this performance positively. They were unified throughout the match they never gave up even when the results seem to be up in the air they fought until the very end. Stephan El Shaarawy scored another goal in what has been a really special campaign for Roma’s Winger. Justin kluivert shows more promise being a spark plug off the bench as he facilitated an opportunity for Roma score as El Shaarawy took Roma in front. Edin Dzeko who has struggled all year finally put in a really special performance despite not scoring he was the difference for Roma a large portion of the match. Even defensively something that they struggled with all season they did relatively well on the corner kick that saw Genoa equalized there was poor marking on the play but outside of that, it was a pretty strong defensive performance. However, it simply was not good enough Roma needed to go in there and ripped through them. The schedule favored Roma over the last stretch of the Season. All they needed to do is win the games that they’re expected to win. If they lost Juventus no one’s going to kill them over that but you have to beat Genoa even away from home where they are difficult you have to beat them. They so easily could have won this game they did a lot of good things well but not enough and because of it Champions League football starts to slip from them.

I think anyone who walks the game can agree that a draw was a fair result that reflected the game itself. However, Genoa could have won this game and I am not talking about the late penalty. Genoa could have taken the lead before that before it was desperation to score. Genoa did an incredible job in the first half attacking Roma by all accounts they were the better team in the opening 45 minutes. They eventually were bailed out by their goalkeeper late in the first half but for the majority, they were the better team. Quite honestly could have scored on a few occasions. The reason they didn’t score and failed to take the lead earlier in the match was because of one of my most simple rules a football. Stay on sides so many times they could have gotten some great positions but just couldn’t stay on sides. The offside calls we’re almost regular every time they went forward I think some credit does go to the defense but for the most part they’re doing it to themselves they need to do a better job of paying attention and staying more organized. I’m not saying if they would have stayed on sides they would have won the game or taking an early lead but it’s definitely a possibility. It stopped so many of their scoring chances especially early when they appeared to have the momentum. In every match players occasionally get called for offsides. It happens to everyone but the amount of time this happened was insane these are professional footballers they have to be smarter and display better intelligence to stay onside before getting ahead of themselves. Granted they played a really great game but had this not been a problem the results may have looked different.