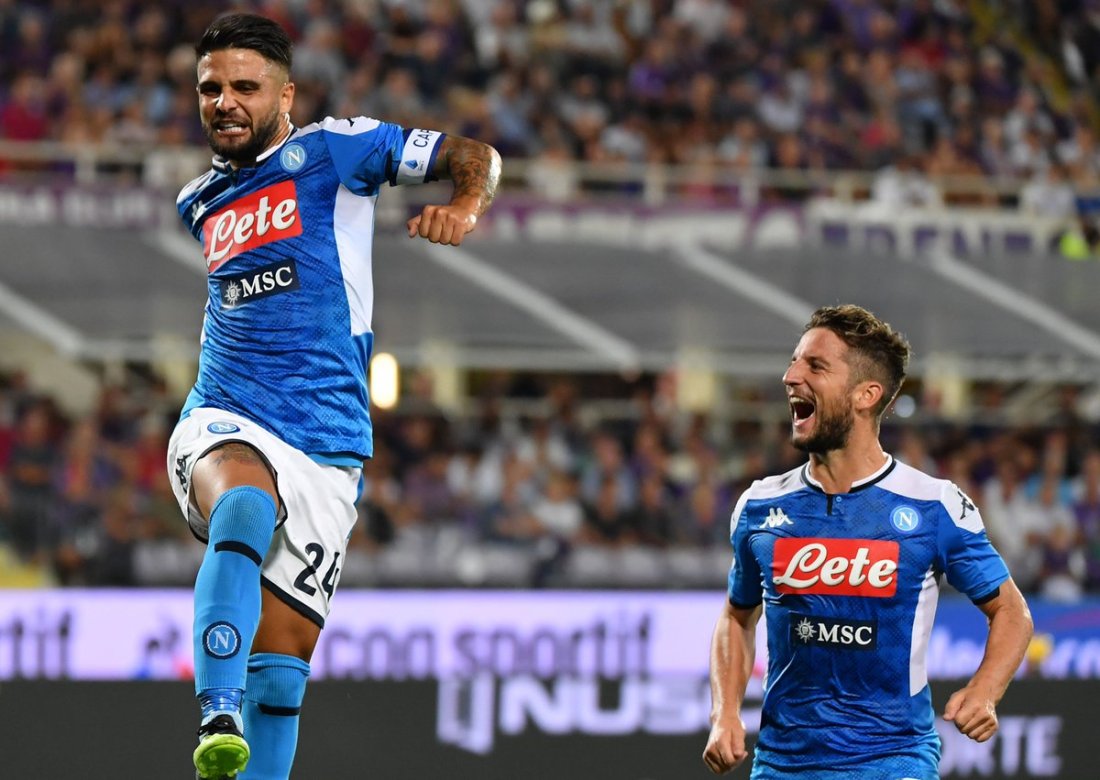 The Serie campaign this week started with a fire show in Florence. Florentina hosted Napoli on the opening day of Serie A last Saturday. A very strong Napoli team that is looking for a scudetto chase this season against a Florentina team that has hope and ambitions since the Takeover of Rocco Commisso that has brought in players good enough to fight for Europe. It was a wild and crazy game that wasn’t short of controversies and great goals. Things started in the 9th minute when Piotr Zielinski was called for a handball in the Box. It was somewhat controversial as we saw the new handball rule in action. Piotr Zielinski saw the ball hit underneath his arm. A questionable call but as a rule states, it was a penalty. New Florentina signing Erick Pulgar stepped up and put it into the back of the net to give Florentina a 1-0 lead. It was a very balanced game with both teams attacking trying to give themselves an advantage. Napoli and Florentina both had moments in the first half. Eventually, late in the opening 45 minutes, the game opened up massively. Dries Mertens after receiving the ball from Lorenzo Insigne scored a screamer putting it into the top corner arguably the best goal of the night to equalizer Napoli making it 1-1 in the 38th minute. 4 minutes later Napoli was given a penalty. It was without question a dive by Dries Mertens but none the less the penalty was given. Lorenzo Insigne converted from the spot to give Napoli the 2-1 lead. In the second half, Florentina hit back immediately within minutes getting the equalizer. Nikola Milinkovic connected on a header to find the back of the net making it 2-2. However, we were just getting started just five minutes later following a beautiful counter-attack by Napoli Jose Callejon hit a one-time strike coming from a Lorenzo insigne pass and drilled into the bottom left corner as Napoli retook the lead making it 3-2. Nine minutes later Florentina got right back into it yet again as substitute Kevin-Prince Boateng hit a deadly strike from outside the box as Florentina that got themselves back in it again making it 3-3. Just two minutes later following another counter-attack by Napoli Lorenzo insigne put his head through a cross from the wing sticking it in the back of the net to make it 4-3. It was a very tightly contested match up. Franck Ribery came on for the last 10 minutes and there was a supposed penalty at the end but it was not called as Napoli hold off Florentina in a seven-goal thriller with the Naples side winning a match of controversy. In a match of non-stop excitement as Napoli take all three points home with them. 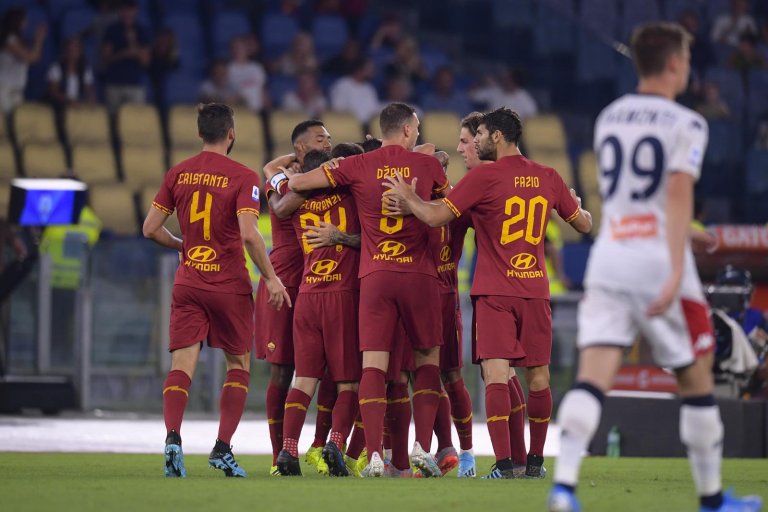 In the Capitol on Sunday night we saw a new-look Roma take on a Genoa side that has improved massively over the summer. Much like the Napoli and Florentina game it was an absolute show for 90 minutes. The intensity and the attacking football displayed itself very early for the Romans. You could see the influence of Pablo Fonseca on this Roma side. He is a a genius when it comes to attacking football and we saw that almost immediately in Roma’s opening game of the season at the Stadio Olimpico. Turkish Superstar Cengiz Under cut from the wing into the box getting around defenders before smashing the ball into the back of the next to give Roma the early 1-0 lead. Roma controlled the game but Genoa took advantages of the few chances they had in the opening half. Former Inter Milan product Andrea Pinamonti took advantage from a defensive mistake smashing the ball into the back of the net to equalize making it 1-1 after 20 minutes. Roma came back again shortly after with some brilliance after seeing the connection between Bryan Cristante and Edin Dzeko. The midfielder supplied a superb ball into the box to find Edin Dzeko. Dzeko faked an outside move before cutting inside as he was swarmed by the defense was able to use his limited speed to propel around them before slotting the ball into the bottom corner in what was a truly outstanding goal. Possibly one of the best goals he has ever scored in his career. Edin dzeko took his Roma career goals to 88 which puts and 7th on the all-time scoring list. Things were looking good for Roma’s as they thought they were going into the half with the lead. However right before halftime Juan Jesus took out Andrea Pinamonti. A penalty was given and Criscito converted equalizing making it 2-2. Roma push themselves at back in front of early in the second half. When Alex Kolarov struck gold from the free-kick scoring an absolute screamer scoring for the first time against Genoa in a decade as Roma took the 3-2 lead. Roma’s attack was mouth watering as they made many opportunities to add on that but defensively it continued to be an issue. Genoa took advantage once again on a diving header from a defensive miss assignment as Christian Kouamé Brock Genoa back yet again making it 3-3. Roma continue to try to push and find a winner but ultimately it was unsuccessful in what was a disappointing yet exciting 3-3 draw as points are split at the Olimpico. 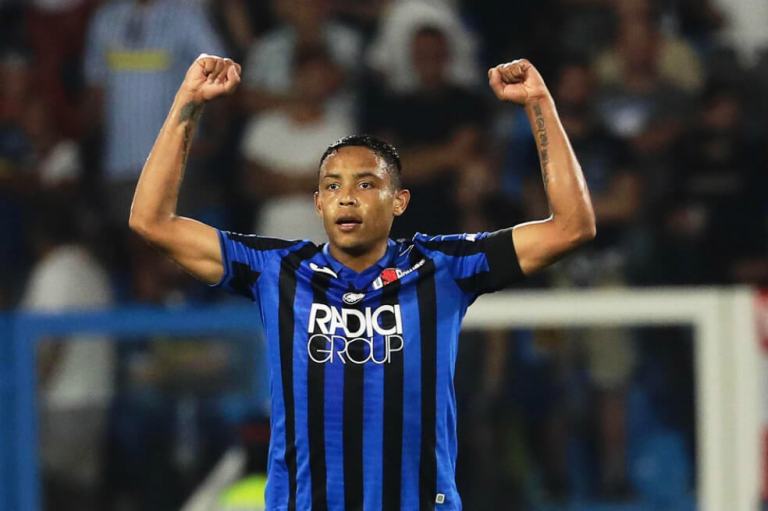 The drama was a constant thing in the opening week of the season. Atalanta vs SPAL was an absolute doozy. For the first time in club history, Atalanta has expectations the question is could they and can they handle the pressure. Following a third-place finish last season they need to show that they can have consistency in multiple competitions. It could not have started any worse for the Champions League club against SPAL. They struggled early away as Federico di Francesco on a Counterattack put together by Andrea Petagna converted on the Breakaway as DiFrancesco gave spal an early lead in the opening 10 minutes making it 1-0. SPAL hit back again a few minutes before the half-hour mark as Andrea Petagna put his foot through a Julio cross into the back of the net making it 2-0 in the favor of spal. Atalanta tried to get back in the game as Hateboer connected with Gosens connecting on a header to minimize the deficit as SPAL led 2-1 at halftime. It had looked like spal was going to pull off a huge upset against Atalanta. However, things started to change when Atalanta brought on Luis Muriel off the bench. The Colombian Striker change the game when he Struck from Deep outside the box to equalize making it to 2-2 with only 20 minutes to play. Just 7 minutes later he did it again. With another strike just outside the box to give Atalanta the 3-2. An absolute spark plug off the Bench is the big difference as Atalanta come from behind to beat spal 3-2 away from home. A slight cause for concern but they battle back to show their convictions as they take the three points back to Bergamo. 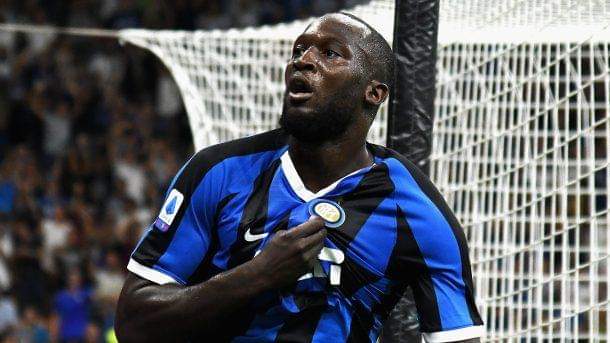 The Antonio Conte era in Inter Milan began on Monday night. It was easy simple and a truly dominating performance from the Milan Giants. They’re playing field may have been inferior as they were up against one of the worst teams in Italian football but nonetheless, you can only play who’s in front of you. Lecce had no chance even before the game kicks off. It was going to take a Hercules type effort to overcome Inter Milan. Marcelo Brozovic scored an absolute screamer from outside the box to give Inter Milan a 1-0 lead after great ball movement within the box by inter. Just three minutes later Inter Milan doubled their advantage as Sensi dribbled into the box before tucking the ball into the bottom corner to give Inter Milan a 2-0 lead. Inter Milan continued to dominate the game as it was just inevitable that they were going to score more but after the first half, Inter Milan had a two-goal lead. Inter Milan only added on that early in the second half. Lautaro Martinez Struck from Deep the goalkeeper got a hand on it and in the right place at the right time was Romelu Lukaku who put it into the back of the net to give Inter the 3-0 lead scoring on his debut. Inter continued to dominate the duration of the game however they weren’t done quite yet. The Milan side had one more goal left in them 7 minutes until the end Antonio Candreva scored from outside this time zone with an absolute cracker from well outside the box as well as Inter Milan a cruise with a 4-0 in the return of Antonio Conte. It was against a very inferior opponent but they got the job done are they the title favourites? It’s way too early to tell so don’t even go there but they could not have started any better than they did. 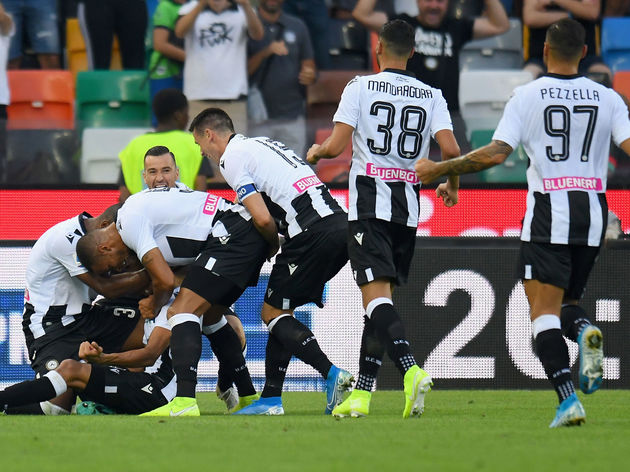 There was a lot of excitement during this opening week. However, we had a massive upset on our hands. AC Milan gets stunned away at Udinese. AC Milan changed managers and made a lot of adjustments over the summer during the first week it seemed no different. It was the same AC Milan we saw last season there was no new identity. AC Milan where the second-best team throughout the match despite some controversy that occurred in the second half of their loss it doesn’t matter. You cannot complain about a penalty that was not given when you play that poorly. Udin dominated AC Milan for the majority of the match. Every chance that AC Milan had during that game they ruined it. Subconsciously AC Milan may have been hoping for a draw but it didn’t turn out that way. The performance of Gigi Donnarumma is the reason it was only a one-goal game they would have been demolished if it wasn’t for the AC Milan goalkeeper. He could only do so much in this game the inevitable goal happened late in the match as Rodrigo Becao scored the winning goal off a corner kick to give Udinese the 1-0 lead. Milan did not register a single shot on target the entire game it was a dreadful performance as this AC Milan team seems no different than the one we saw last season. It is just one game but there is a serious cause for concern surrounding this performance and this team. It could be a long season for AC Milan.