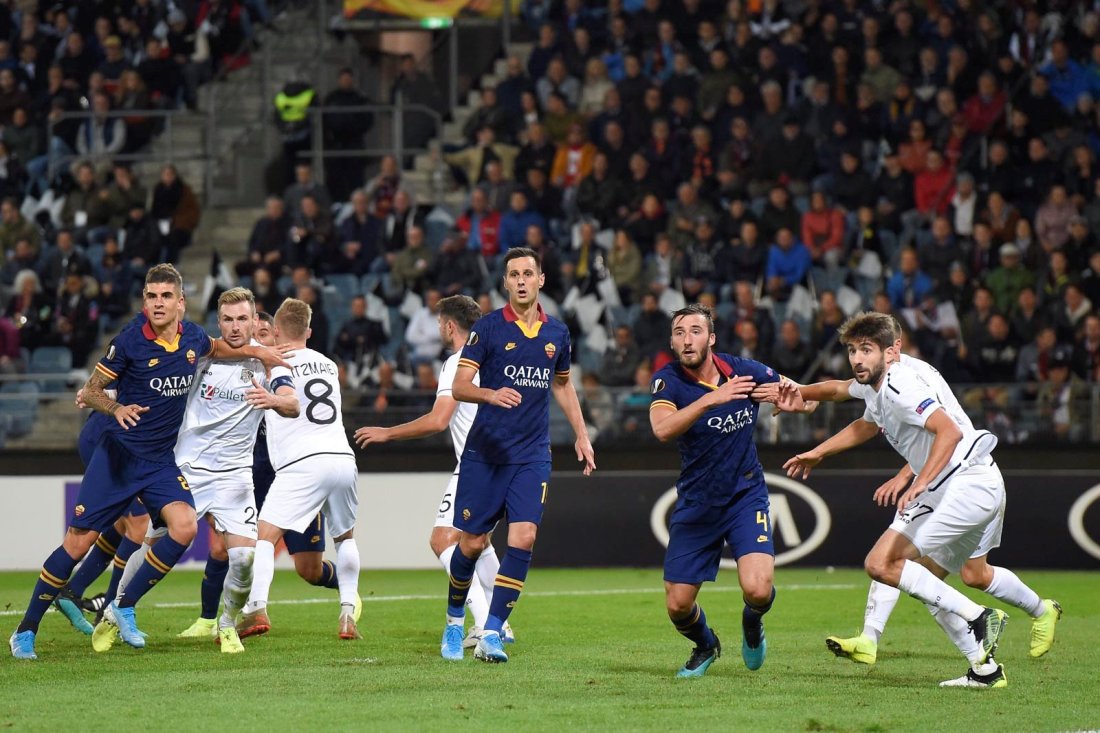 Following Roma’s narrow victory away on the road to Lecce thanks to an edin Dzeko second-half goal. Roma would prepare for the second match of the Europa League campaign as they sit on top of the group with three points. After they beat down Istanbul at the Stadio Olimpico in what was an eventful 4-0 Victory. On this occasion, Roma headed out on the road to Austria to face Wolfsberger. The Austrians had very little European experience prior to this competition which is why it was such a shock when they went to Germany and beat Borussia Gladbach. It is very early in the competition but it was a battle between the top two teams in the group. Roma is the favorites in the group Wolfsberger needed to take advantage of all the opportunities they can especially in their home opener in the Europa League. While Roma has much more talent and ability in their squad going on the road in this competition can be very difficult and testing. Roma ended up resting a good portion of their team and had to switch some stuff around the following the injury to Lorenzo Pellegrini and Mkhitaryan. Without Lorenzo Pellegrini, it became a struggle Roma created a lot of chances to a certain extent found it difficult to convert in front of goal part of that could be the absence of that and Dzeko in the lineup but nonetheless the game presented some challenges that Roma wasn’t expecting. Despite a lack of clinical finishing ability, Leonardo spinazzola gave Roma the 1-0 lead. Roma continued to create in the second half but couldn’t find the Finishing Touch necessary to kill off the game. Meanwhile, Wolfsberger came forward and looked dangerous in a lot of situations eventually they broke through with a stunning strike from outside the box they gave the keeper absolutely no chance as they equalized. Roma had control the majority of the game but Wolfsburg came through when it counted as points are split between Austria. This evening glaring thought through everyone’s minds is Lorenzo Pellegrini severely missed.

Roma having to deal with the injuries there was a major shake-up in the team with a rather unusual lineup. Roma has another game this weekend so several players were giving a rest. Despite the injuries to Lorenzo Pellegrini and entered Mkhitaryan Foncesa stays with the 4-2-3-1 formation. In goal for Roma would be an Antonio Mirante as Roma starting goalkeeper Pau Lopez was given rest. In Roma’s backline at left-back coming in for Alex Kolarov would be a Leonardo spinazzola. Beside him would be the center-back partnership Federico Fazio and Gianluca Mancini then at right-back making his first appearance of the Season would be Davie Santon. In Roma’s defensive Midfield we would have the Duo of Bryan cristante & Adomu Diawara. In the attacking Midfield in the central position would be Javier Pastore. On the left-wing would be Justin kluivert then on the opposite side on the right-wing would be Nicolo zaniolo. Then upfront as the main Striker would be Nikola kalinic as edin Dzeko was also given rest.

After preparations and predictions, the match was just about to kick off in Austria in what was another European night between Italian Giants Roma and Austria’s surprise package Wolfsberger. It would be the home opener of Europa League play for the Austrian side they were going to try to view this as very critically after getting off to a great start last week they only looked to continue on that. Meanwhile, group favorites Roma look to continue their momentum in this competition. Matchday 2 in the Europa League kicked off in Austria. Roma had complete control of possession as they started the match. It was clear from the beginning that we’re going to have to take advantage of the minimum possession that they were going to get. Roma attempted to draw blood first as Gianluca Mancini put its head through a cross from Javier Pastore but the Italian center-back missed wide. Roma had slight control at least in the early part of the game. Nonetheless, it did not appear they were dominating the match. Wolfsberger had to initiate themselves in the match. Roma had a few more opportunities early through Nikola kalinic & Justin kluivert who missed from the side of the Box. Despite not playing particularly well in the beginning parts of the game Roma we’re getting opportunities just we’re starting to find difficulty converting in front of goal at least in the early stages. They continued to have the bulk of the possession but weren’t doing much with it as Wolfsberger defensively we’re doing a decent job on a very effective Roma attack. It took a while but eventually, Wolfsberger started to gain that confidence as they came forward much more aggressively. Michael Liendl had hit a shot saved by Antonio Mirante. Over the next few minutes, Wolfsberger tried to strike twice but the touch wasn’t there as they misfired on both attempts. Despite this, they were starting to gain some confidence and looked dangerous at certain moments. If you can more balance as the match progressed but Roma would find their moment in the 27th minute. Coming off corner kick Leonardo spinazzola put his head through the cross bearing the ball into the bottom corner to give Roma the 1-0 lead. It is his first goal for Roma since his move from Juventus this summer. Roma aggressively tried to double their lead through Javier Pastore and Nikola kalinic but was unable to increase. Justin kluivert and Nicolo zaniolo we’re doing a great job at servicing the striker as they continue to try to push the ball forward. Wolfsberger searched for an equalizer with a couple of late chances but After 45 minutes it was a 1-0 lead thanks to a Leonardo spinazzola.

Despite having the lead in the match Roma left a little to be desired with their failure to convert in front of goal. The loss of the Pellegrini became pretty evident as his absence attributed to some of the issues Roma had in the first half despite that they had the lead. Early in the second half, Roma started to gain some more momentum. Nicolo zaniolo saw his strike saves after a well-hit shot from outside the box but the goalkeeper got his hand to it. However, the match was about to turn on its head. Just a minute later Michael Liendl Struck from outside the box as a ball ripped through the top of the net and In an absolute Sensational hit from Wolfsberger’s best player to equalize. Wolfsberger started coming at the game a little bit more aggressively as they were in search of a winner but at the same time, they did what they could to try to maintain as Roma kept coming still finding difficulty trying convert despite dominating as Justin kluivert Nicolo zaniolo and Javier Pastore came close but missed. Then a few minutes later Federico Fazio connected on a header but the game remained level as it truly was looking difficult for Roma. They had control of the match but they were on the verge of dropping points. Nikola kalinic and Nicolo Zaniolo had more chances but Roma still couldn’t find the Breakthrough. Roma would make their first change of the evening as Antonucci made the first appearance of the season as the teenager came in to replace Javier Pastore. The youngster wasted no time as he struck within minutes of entering the game but his shot didn’t find the mark. Roma brought on Alex Kolarov and Jordan Veretout to try to add some sort of explosion in the late minutes but ultimately time ran out as Roma split points with the Austrian side in a match that felt like a disappointment with the absence Pellegrini being felt throughout the stadium.

Roma are heavy favorites to win this group and they still are but this performance tonight was not encouraging. Away from home in Austria, the Romans struggle. They got a 1-1 draw with Wolfsberger which even though they get the point they have to look at critically. They still remain top of the group and they will probably not be just thrown from that spot but just systematically in certain situations they did not do enough. Roma missed a bulk of their team but despite that Roma should have done better. Wolfburger after beating up on Glagbach split points with Roma in matchday 2. The atmosphere certainly helps them in this match and they played well enough to earn a point. However, Roma has too much Firepower to drop points with the likes of Justin kluivert Nicolo Zaniolo and others even though a good majority of the team was being rested there was enough within at the squad to get the job done. This result isn’t the end of the world if this was a game at the Stadio Olimpico I think we would have a different perception of what the result actually means. However, this is away in Austria in a team that has not been in Europe that frequently they were ready to play and they did enough to earn the point. That’s not to mention all the injuries that Roma has at the moment Javier Pastore came in for Lorenzo Pellegrini and I think he did quite well. He had several key passes that had Roma on the brink of opportunities and I thought he performed. However, he’s not Lorenzo Pellegrini that is something that was really obvious in this game they miss Roma’s number seven. He still will not be on the pitch for quite some time and Roma needs to figure out a way to adjust everything. The impact that Lorenzo Pellegrini on this game is almost Irreplaceable. Roman needs to find someone who can do a job not up to the standard of Lorenzo Pellegrini but a player that can do well enough so Roma is not dropping points in games like this. This isn’t the end of the world but it’s a little concerning to see a lack of offensive Firepower without Lorenzo Pellegrini. Henrikh Mkhitaryan and Cengiz Under also remain out once they get these guys back we will start to see a little bit more fluidity in the team it was lacking tonight. Roma could have won this game but honestly, a draw was a fair result. Wolfsberger put themselves in a position to get points that they will be very happy with. However, Roma needs to be more clinical in front of goal we could be having an entirely different conversation. The man-of-the-match goes to Leonardo Spinazzola I thought I did quite well to score the goal when he had the opportunity. They get the point they’re still top of the group but tonight Roma should have done better tonight they just didn’t have the Surplus requirements to pick up three points.

MAN OF THE MATCH: Leo Spinazzola