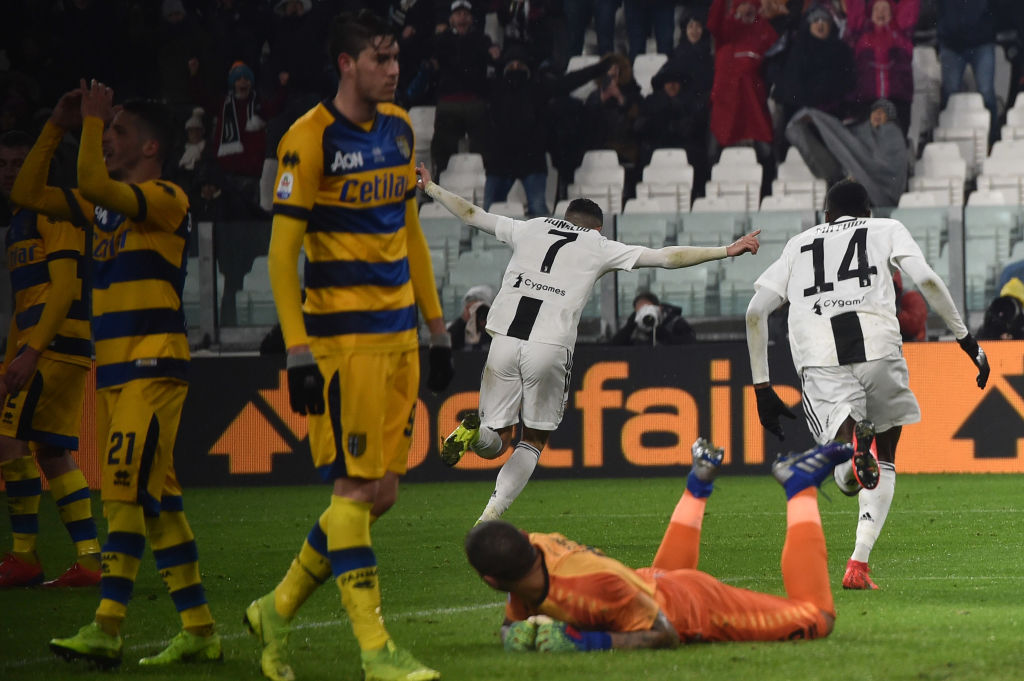 Juventus had a great opportunity to go four points clear at the top of the table this weekend. This was not going to be an easy task though as they welcomed Parma to Allianz Arena in Turin. Juventus have been in a battle with Inter Milan and Lazio for the league title it has heated up by the day. It really truly has been a very challenging yet competitive title race this season. Juventus recently took over at the top of the table after Inter Milan drop point to Atalanta last weekend. It was going to be a really big opportunity for Juventus. Meanwhile Parma are no slouches themselves. As if they are vying for a European spot this season. This Parma club has really a resurrected over the last few years as they are now becoming what they once were before they went bankrupt. They have quality players all over the place and certainly have a good enough team to push Juventus to their very limit. As capable of Parma is get to get the job done it was the wrong time to face Juventus Cristiano Ronaldo was heating up at exactly the right time. After a poor start to the season the Portuguese star has finally caught fire and is putting the league on notice. It was a very well-balanced back and forth battle throughout the opening half of this match. Even though Juventus controled possession and we’re creating a lot of chances of this match. Parma would occasionally come through with a Chance to break through. Sepe and the Parma defense did a really good job against a really strong Juventus attack. Cristiano Ronaldo came close on a couple occasions and Danilo even hit the even hit the post. Then in came Cristiano Ronaldo right before halftime. The Superstar cut on the left wing before putting some moves on the defense into the box before striking from the side. A really well-executed play that took a slight deflection Landing into the back of the net as Cristiano Ronaldo gave Juventus a 1-0 lead right before halftime. In the second half Parma started to show with their qualities as they try to get back into the game. Parma would have their moments after not too long. Andreas Cornelius came off the bench came off the bench and delivered a header of pure quality as he found the back of the net with his head to equalize. Unfortunately for Parma this would not last very long just three minutes later Cristiano Ronaldo once again after being set up by Paulo dybala Ronaldo drill the ball into the bottom corner to give Juventus a 2-1 lead just minutes after conceding. This is the main reason why this team is so successful they have winning intangibles and in the most important moment of the game they found the way through. Parma wasn’t backing down over the remaining part of the second half they came close on many opportunities. They continued to chip away at the lead with some really outstanding goalkeeper in from Szczensy it made things difficult for Parma. In the closing moments of the game they couldn’t find the touch they were looking for as Juventus held on to earn a 2-1 Victory. Thanks to Inter Milan draw with Lecce the defending Champions Juventus go to the top of the table and open up a four-point advantage as they are really starting to look like Champions once again. 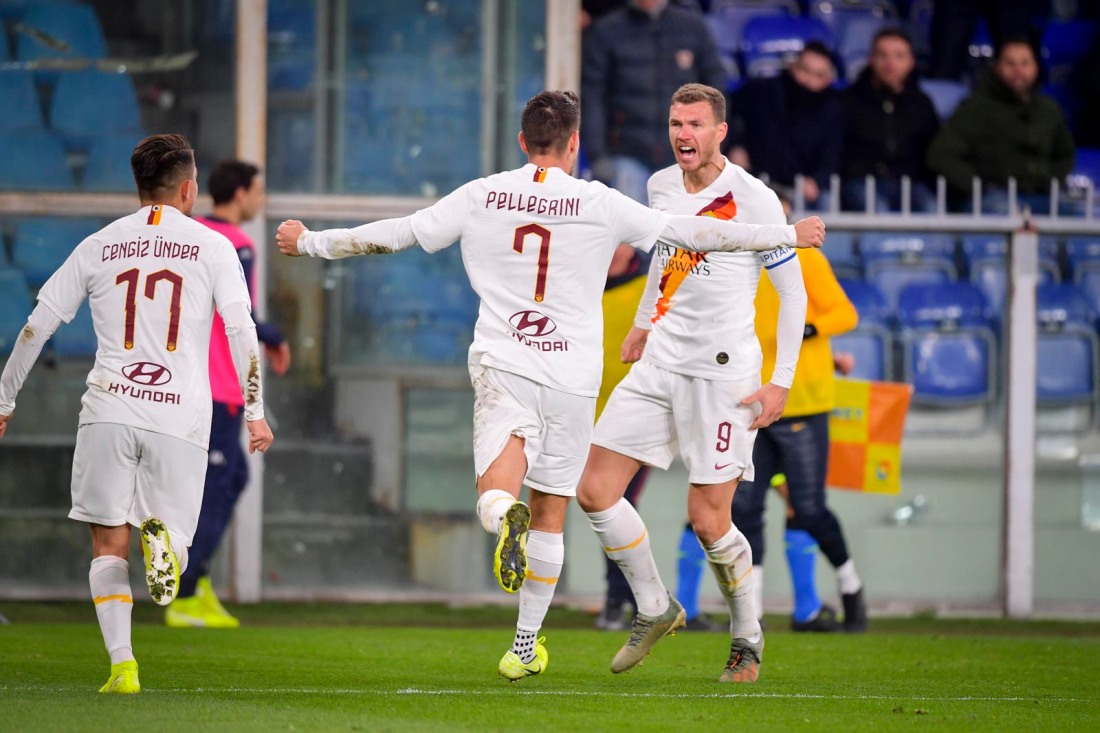 Roma picked up their first victory in the league in 2020. As I’ve mentioned Roma went into the winter break with consistency and pretty incredible form. The two week break over Christmas certainly didn’t help the situation. They came out a little flat in their opening two games and suffered back-to-back losses. They had played so well up to that point. There were unbeaten and eight games prior to their loss to Torino and Juventus. They had a great chance to turn this around yesterday night. Prior to the game yesterday they picked up a midweek victory with a 2-0 win over Parma in the Copa Italia round of 16. Even though the match wasn’t going to reflect their table positioning it gave them a little bit of confidence ahead of a really important match against Genoa team that was sitting near the bottom of the table. With the Derby next weekend it was really important that Roma put in a really good performance given the type of form that Lazio is in. They traveled to the stadio Luigi Ferraris in Genoa a place that many teams find difficult regardless of how strong the team is it’s never an routine victory. Things could not have started any better for Roma as they took a very early lead in this game. Roman inconsistent Turkish star Cengiz ended up scoring his first goal since the first match of the season. Putting together an intended cross from the corner of the box that just was out of the reach of Pellegrini as the ball rolled into the back of the net to give Roma a 1-0 lead. This could be really important for under as he is lacking confidence at the moment. Roma continued to dominate this game they had control we’re creating lots of chances and had a significant advantage in The Possession battle. The ball was is Genoa’s danger area frequently. Right before halftime Leonardo spinazzola opened up Genoa again Roma’s left back that nearly left for Inter Milan last week made a big impact for the Romans. He did a really good job of cutting into the box propelling himself around Defenders before trying to cross it into edin dzeko. Genoa ended up putting the ball in the back of their own that as his shot took a big deflection to give Roma a 2-0 lead. Roma making things really quite simple as they were finding things quite easy. However Genoa responded immediately after a cross from Midfield Pandev ended up scoring at the other hand to end the first staff. After 45 minutes it was a 2-1 lead for Roma. All of a sudden Genoa seem to have the energy that they needed. they really pressurized the Romans and push them back as Genoa was coming forward with confidence and conviction. However fortunately for Roma Pau Lopez is Roma’s goalkeeper. This Spaniard came through in some of the biggest moments of the game that eventually took momentum away from Genoa. Coming off a cross Pandev put his head through Paul Lopez made one of the best saves of the entire season. That ball was going into that top corner and it seemed like there was nothing that could be done. Pau Lopez rescued the day as he orchestrated his body back pushing the ball out from underneath the crossbar as he fell in the back of the net. One of the most incredible saves we have seen so far this season. That was a huge momentum shift in the game. Shortly after that Genoa will struck again and yet again Pau Lopez comes up with a big save to deny a comeback. This was only one goal game at that moment Pau Lopez came through in that moment to a certain extent to rescue them. shortly after Roma started to get their momentum back and once a costly mistake was made by Genoa’s goalkeeper Roma pounced and took advantage of the opportunity. Lorenzo Pellegrini picked off a poor pass from the goalkeeper as he sent through Edin Dzeko who found scored to give a Roma the 3-1 lead as Edin Dzeko scored his 98th goal for Roma. Roma would hold on to earn an important Victory as they reclaim their Champions League spot and get back their much-needed momentum as they head into a week in which they play Juventus and Lazio Roma got back on track at the exact right time they are finally playing to their capabilities once again. 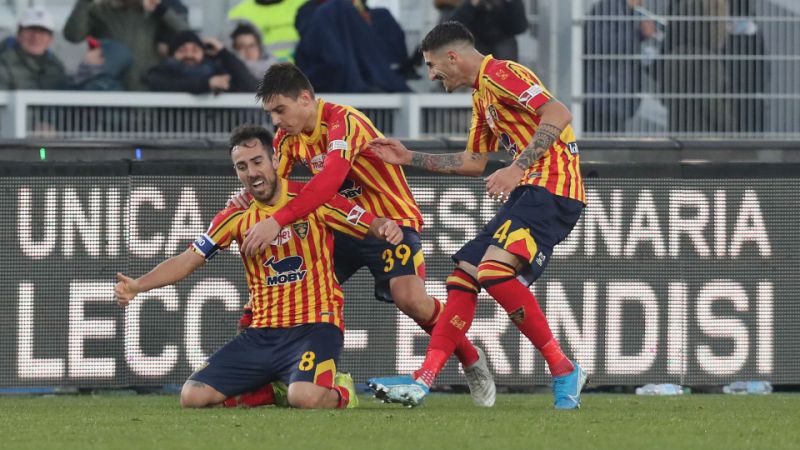 Inter Milan dropped crucial points last weekend against a very strong Atalanta side who outplayed them for the majority of the match. In doing so they allowed Juventus to stand alone at the top of the table as separation started for the defending champions last week. Not only did they not win it was a very underwhelming performance by Inter Milan. It was another chance for Inter to try to get back into the title race and try to assess the mistakes from the week earlier. Antonio Conte would return to his hometown of Lecce for a very important match for Inter Milan’s ambitions. Lecce coming into the game we’re setting only one point above the relegation Zone. Despite this Lecce have proven this season that they have the qualities to handle the pressure of surviving the league. They have all the ingredients to do so and against a title Ambitions Inter Milan team they didn’t move out of their way. It was a really tough match for both teams. Inter Milan came close on a lot of big occasions but Lecce’s goalkeeper Gabriel was having an outstanding match as they constantly came close and were denied by the gloves of the keeper. Brozovic did a lot and The Inter Milan Midfield but Martinez and Lukaku struggled to give Inter Milan that much-needed Advantage they were hoping for. It was much more even then you would expect Lecce found their moments in the game and came forward quite well against a backline that really couldn’t handle the speed of the Lecce strikers near the end of the first half Lecce nearly were given a penalty that was eventually wiped off by VAR. Inter Milan once again or underperforming the expectation in a crucial moment. Both teams left it late as it was goalless until the very end of the second half we’re both teams were exchanging blows trying to pull away and get that much in 4th and goal. it looks like Inter Milan had found a winner as Bastoni came off the bench finally beating the keeper as the twenty-year-old scored his first goal in Italian football to give Inter Milan a 1-0 lead. It was a tough match but it looks like Inter Milan we’re going to gain some momentum back in the title race. However Lecce is a team that is looking to fend off relegation and they needed a response in what had otherwise been an outstanding performance. Just a couple minutes after Inter Milan had taken the lead Lecce took it right back. Manasco came through and delivered late to equalize. Against all the odds Lecce steal a point at home against Inter Milan. Lecce start to pull away from the relegation Zone Inter Milan looked like they had hit a wall in the title race. Juventus would go on to win their match against Parma as the defending champions now have a four-point cushion above Inter Milan. Antonio Conte has changed life in Milan but it seems like they have lost some of that early momentum Inter Milan drop crucial points that hurt their title challenge.