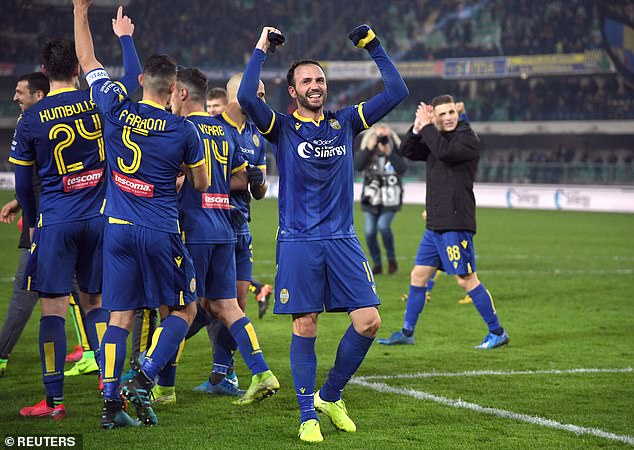 We were put on upset alert in Verona Juventus had picked up the momentum and was driving themselves through to another league title. Obviously Inter Milan and Lazio have been on their tail the entire way however Juventus is a team with winning intangibles and is capable of lifting multiple trophies each season. Since Cristiano Ronaldo has got hot the Champions haven’t looked back and going into Verona on a Saturday evening Juventus was looking for more of the same as they continue to try to build their title campaign. Juventus is a team that knows how to win games regardless of how pretty or ugly it may be. Meanwhile the hosts were up for the challenge. Hellas Verona has been this season’s Cinderella Story. They were promoted to the top of Italian football this year and despite very little expectations of what they could do they have found themselves in the top 10 and have been able to get points against several of the big teams in the league. They earned a big points against third-place Lazio earlier in the week and we’re now preparing for the biggest challenge of all the Juggernaut Juventus. Hellas Verona from the start of the game had a certain level of confidence about them. They didn’t waste any time trying to put themselves in the right position to try to put themselves in front. It was very attacking style football and Juventus had a little bit of trouble dealing with it. Hellas Verona by surprise did seem to have the control out of the two teams and had the better chances. In fact they even took the lead. At least that is what it appeared to be. VAR ended up taking away a perfectly good goal. The confidence of the team didn’t change though. Even before that they were on the verge of breaking through on several opportunities. Juventus had significantly less chances and there was a certain insecurities about them in the way they played especially in the first half. However a Douglas Costa strike from outside the box looked like it was going to take the visitors in front it ended up clipping the inside of the bar before coming out. It was a goalless game after the first half but Verona were in a really good position against a Juventus team that was really struggling. In the second half the league champions grew into the game a little more and after Paulo dybala was brought on in the second half he set up the opening goal as Juventus we’re about to run out in front. It was the man the myth the legend Cristiano Ronaldo scoring in his historic 10th straight game. However on this occasion list might have been his very best one on a break away from the center of the pitch he drove the ball into the box coming forward in a tense situation and slotting the ball into the back of the net to give Juventus a 1-0 lead. It seemed very harsh on Hellas Verona who outplayed Juventus for the majority of the game. However they would have their moment and eventually they got back into it. With a little over 20 minutes to go Fabio Borini took advantage of a mistake in the Juve a backline. He drove the ball into the box from the side tucking the ball into the back of the net scoring a really crafty goal to equalize. They were on the verge of losing they were on the verge of losing their spot at the top of the table Inter Milan beat AC Milan on Sunday  and they could overtake Juventus and go to the top of the table if Juve failed to in. That concern became a reality the Ageless Wonder Giampaolo Pazzini had the opportunity to give Verona a historic victory. Leonardo bonucci made a bonehead play giving Verona the penalty with less than 10 minutes to go. Giampaolo Pazzini stepped up and delivered to push Hellas Verona in front in what would be the winning goal. Hellas Verona pulls off a huge upset beating Juventus at home 2-1 In a match that could be hugely important not only to their season but to the title race at the top. It was collectively a very poor performance from The League champions.

On a Friday night bologna issued even more misery on a Roma team that just can’t seem to get it together. Atalanta at this point look more likely to make the Champions League then Roma. If things don’t start changing it will get out of hand since the start of the new year Roma have lost four League games which is more than that had during the first half of the season. Roma needed points and badly as they came into this game hoping it will be a chance to turn things around however bologna was not going to lie down for them. Mikhailovich had his team ready to play as all of a sudden bologna is one of the most in-form team in all of Italian football having won three of their last six games being unbeaten. Roma’s first-half performance was reminiscent the last week they were abysmal and made defensive mistakes all over the place that allowed a bologna to take an early first-half lead. Chris Smalling made a catastrophic error that allowed Riccardo Orsolini to break through giving bologna a 1-0 lead. Despite playing very poorly Roma ended up getting back in the game just a few minutes later. On a Counterattack constructed by Diego Perotti and under they ended up forcing an own goal on a cross intended for Edin Dzeko was put in the back of the net by the bologna defense allowing Roma to get back into the game. The Equalizer didn’t Inspire Roma and push them on the rest of the game. It was a absolutely devastating first half as they provided next to nothing. They were back into the game but it didn’t last very long new bologna signing Musa Barrow came in and delivered a stroke of Genius curling a strike from the corner of the Box taking a slight deflection and finding the top corner to give a bologna a 2-1 lead. They held on to that lead going into the second half as Roma had a lack of inspiration. Roma were awful during the first 45 minutes and early in the second half it didn’t look like there was much change. Once again Musa Barrow was the story of the match as he took the ball on a Counterattack breaking through the Roma defense Inside the Box before calmly and collectively sliding the ball into the bottom corner as bologna ran out to a 3-1 lead with Musa Barrow’s second goal of the game they could not contain him much like problems they had with Francesco Caputo Roma could not handle the pace of the counter-attack as the defense continue to struggle. The match seemed all but over but Roma still try to fight back. Carlos Perez came into the game midway through the second half and the game changed Roma had the momentum and found their way into the danger area on numerous occasions. They still needed two goals and even though Roma did not play particularly well in this game they found a way back into it. Edin Dzeko delivered a short pass to Bruno Peres as the ball was inches away from going out the Brazilian Defender hit the ball into the line of play to find Hendrick Mkhitaryan who delivered a emphatic header into the back of the net. it was a one-goal game with a little over 15 minutes play there was a chance Roma could seek a late equalizer to earn a point. It would have been a point they did not deserve but nonetheless Roma went further in that final 15 minutes and came close on several occasions but despite late chances from Edin Dzeko it was too little too late as bologna go to the Stadio Olimpico to hand Roma their fourth League loss Since winter break as bologna storm the Italian Capital with a 3-2 victory. Bologna stay hot while Roma seems to be on the verge of collapse.