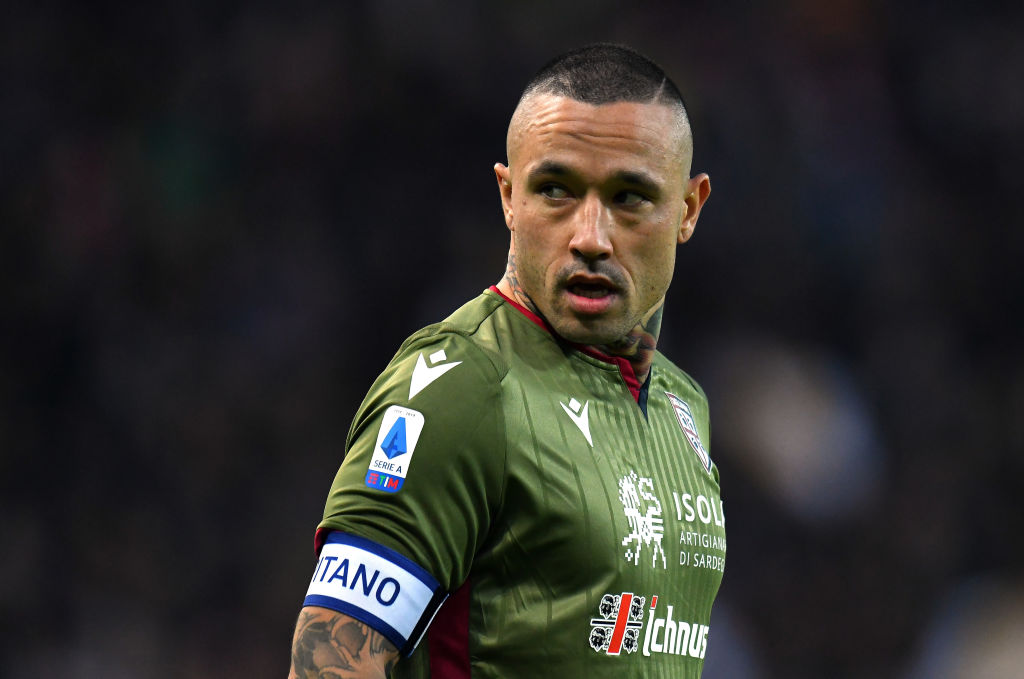 In the central Midfield, I went with one of the most misunderstood players in all of Italian football. A player that has often been tagged as a problem in the locker room; Even though there has been no evidence to suggest those claims. Radja nainggolan has been one of the most impressive players in the league this season. Helping an unlikely team overachieving expectations. Cagliari During certain moments of the season, we’re in a European race even though they ultimately were exposed. it was mainly due to the impact and Leadership of the Belgian. Radja nainggolan had been five years in Roma as one of the primary midfielders in Italian football. Two years ago, he was involved in a transfer swap between Inter Milan and Roma. Including one of the young stars of Italian football Nicolo zaniolo and himself. It wasn’t necessarily his fault that the young, unproven Italian became the best youngster in the entire league that was entirely out of his control; however, his name will always be attached to that transfer. Nicolo zaniolo was responsible for 2.5 million of the transfer currently he’s worth at least 60. Again that wasn’t his fault; his time at Inter Milan didn’t last very long either. As they gave him the ultimate disrespect the Belgian scored the goal that got Inter Milan into the Champions League this season. As they nearly missed out despite this, Antonio Conte had no interest in the dynamic midfielder. He went home to Cagliari, where he first came onto the scene many years ago. It was a dry loan deal, and he probably will be sold permanently this summer; however, this turned out to be a blessing in disguise. A Cagliari team that has never been a threat for European football all of a sudden became one. The notion that he was a difficulty in the locker room totally single it’s self out with a tremendous season. One of the most effective midfielders seen in Italian football this year. He has been a leader and a consistent performer of a team that at points was pushing for European football. Even though ultimately they are unlikely to get it he was a big reason for their success this season. He contributed to the attack and the defense as he is consistently earned the reputation as one of the nastiest toughest defensive midfielders in the entire league for a long time. He’s not a player that is going to score a high quantity of goals each season, but his impact that he has on a squad cannot be misrepresented. He has scored 5 goals this season, several of them coming from outside of the area code. I said for a long time, he only scores world-class goals; there’s no in-between. Sublime strikes from deep; it’s his MO. Not only that, but he also has exceptional vision and can contribute in the passing game. He has participated in every facet this season from tackling providing security blanket from the defensive as well as scoring some great goals with supplies as well. It hasn’t been his best-ever season, but it is a season that we did not expect from him. He got a Cagliari team playing exceptional football all season even when they started stumbling out of the European race; they were competitive in nearly every game. They also beat teams like Napoli and got points against Roma; it’s hard to put into perspective what he was able to do. Inter Milan had no interest in him even though this season he is in my team of the season in a Midfield that features no Inter Milan players. Had he been in Inter Milan Midfield this season there’s a good chance they would have won the league title. Antonio Conte does not make a lot of mistakes; this was undoubtedly one of them, and even after his Sensational campaign, he’s still is not interested in the Belgian. He finds his way into my team of the season for the fourth time in the last five years he brought Cagliari to relevance which most people viewed as a borderline bottom tier team. This team dealt with injuries all season, and despite that, Radja Nainggolan kept them afloat and in an extraordinary European race even though they feel out it was astounding. 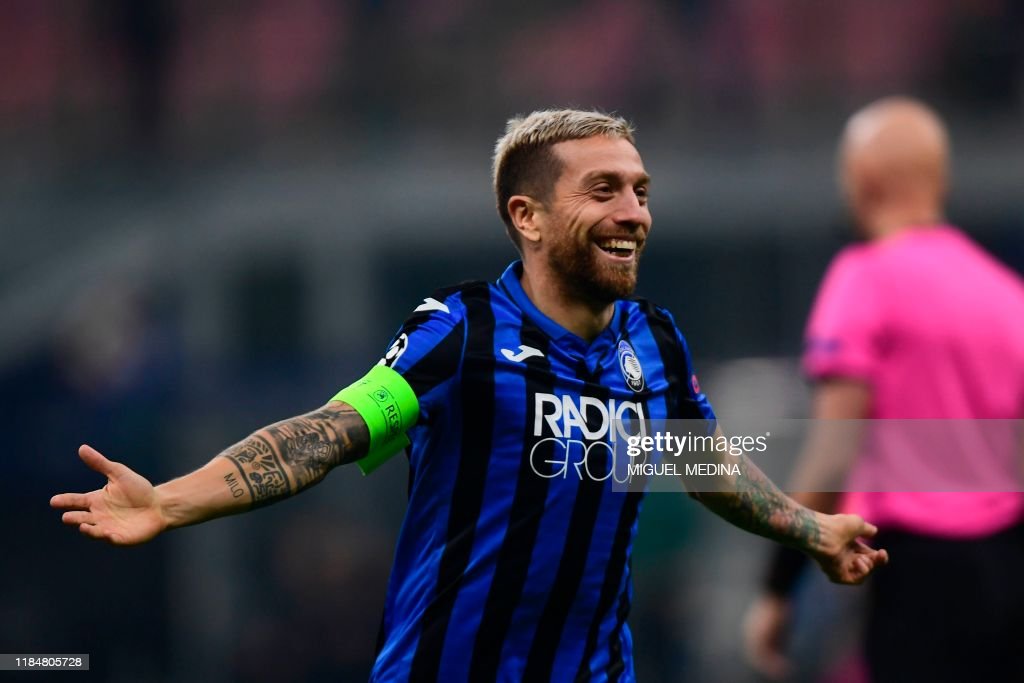 As my other Central midfielder, I recognized one of the dynamos of a vicious Atalanta team. That once again has overachieved and lived up to their expectations. Atalanta was the story of the season finishing in the top three above AC Milan and Inter Milan as well as becoming the highest-scoring team in the league last season as they were this season before the year was postponed. They made the champions league for the first time in club history after having very little expectations for European football. This season the perception was that they were going to fall off the map with the pressure of having to deal with those expectations. It has been quite the opposite even though they lost an essential piece of their defense in Gianluca Mancini; they were as consistent as before, maybe not to the same extent, but still were one of the league’s most dangerous teams. The captain of this team is Papu Gomez the Argentine genius who has been one of the best players in the league this season Once Again. He pulls strings in the Atalanta Midfield and also can come forward and play beneath the strikers as a center forward. He’s a player that never really seems to get the respect that he deserves has pledged his loyalty to the club that gave him a chance many years ago. Over the last several seasons, Atalanta has gone further and further. Papu Gomez has been incredibly important to the club Gathering history that had none before his arrival. Papu Gomez isn’t just one of the best midfielders in the league; he is one of the league’s best players and has proven this continually. There have been many times in which he had occasions to go to bigger clubs, but he’s never moved; he’s always stayed and continued to help the Bergamo Masterpiece uncover. They are the most dangerous attack in Europe outside of Liverpool. It doesn’t matter if they concede goals because they all have all the materials and the mentality to continue to attack regardless of circumstances. Papu Gomez may not be getting the headlines from this Atalanta team due to the progression of Josip ilicic and the consistency of when healthy of a duvan Zapata. As well as many other counterparts of this incredible team. However, Papu Gomez has often become the unsung hero over every part of their Journey. He has been one of the best players in the league this season and was one of my considerations for the player of the season in Italian football. He plays so much importance on the success of this team because of what he does in the Midfield and how important he has in a Counterattack that Atalanta has created over these few years. He has had yet another 5 + goal 10 + assist season proving his consistencies by any metric you use he is probably the best midfielder in all of Italian football. Last season he narrowly missed out on my team this season and I’ll be damned if I’ll leave him out this time. Admittedly I probably made a mistake not putting him in my team of the season a year ago. He has been as consistent and as creative in the attack and what he brings to the side. Without Papu Gomez, it’s hard to imagine Atalanta being this good, especially in the attack. He has shown consistently over the entire season how important he actually is. They had the league’s best attack, and a large part of that is what he’s able to orchestrate from the Midfield. It’s not like he’s unable to score either; he has scored some absolutely Sensational goals this season, furthermore proving how dangerous this Atalanta team can be. This team has the capabilities of winning the scudetto; that’s how dangerous they are from Back to Front. On top of that, he has the intangibles that make him so incredibly it’s hard to imagine there’s a better leader then Papu Gomez. He’s a world-class player that doesn’t really seem to get the respect he deserves, not only among Europe but in the national team as well. He should be a regular with Argentina but it’s never been the case. Regardless of what is said or written about him, he comes up, keeps his head down, and just executes. Atalanta has a specific energy about them Papu Gomez is the one who supplies that. The best midfielder in the league has outclassed the majority of midfielders in Italian; he is just operating on a different type of level. His performance and Leadership deserves to be recognized as this season I’m not making that mistake again he comes in as my second Central midfielder in the team of the season because my selection justifies his performance on and off the pitch.