Gladbach continues to have their eyes on the Champions League next season. It is a tough battle between themselves Wolfsburg and Bayern Leverkusen. Leverkusen’s recent loss gave them a chance to leapfrog them in the standings. Gladbach has the advantage in goal difference, which would put them in front of Bayern Leverkusen with the victory against Union Berlin. Union Berlin has not done well over the last couple of games, but overall this season in their first year in the Bundesliga, they have done exceptionally well considering the circumstances. They May be closer to the bottom of the table at the top, but they’re a team that fights until the end regardless of the score. We saw a lot of that especially late in this game, but it was not an ideal start. Gladbach over the season has been one of the best teams just in terms of the way they have performed they have been a outstanding team that might have a chance to win the Bundesliga next season if they add some pieces they have very minimal weaknesses. Union Berlin early in that game, got beaten by a display of brilliance. Florian Neuhaus got into the box maneuvered around several defenders before tucking the ball in the back of the net, scoring at a tight angle as Gladbach took the 1-0 lead. Before not too long, they would double it as Alexander Plea, the star of the show along with Marcus Thurman as the two superstars connected on a really spectacular team goal. Alexander Plea sent in a cross from the side of the box after dribbling around his Defender into Marcus Thurman’s area as he connected on the header as he was poorly marked by the union Berlin backline to give them a 2-0 lead. Union Berlin fought their way back into the game, at least temporarily. Early in the second half off a set piece Peterson connected on the header beating a Sommer to get one back from Union. The goal did give them some momentum, but you could see that Gladbach just has different types of qualities that made it really difficult for Union to keep the game close. Once again, it was the connection between Alexander Plea and Marcus Thurman. The striker cut into the box, making a really great run before retrieving the cross. Marcus Thurman struck out of the air on the volley into the back of the net giving no chance to the keeper Union Berlin try their best to eliminate the ultimate blow, but it was too little too late with about 10 minutes ago Alexander Plea finished off his spectacular afternoon beating the keeper from inside the box to give Gladbach a 4-1 Victory. Alexander Plea had one goal and two assists on the afternoon while Marcus Thurman had two goals in his own right it was a dynastic Duo on display once again. Gladbach take all three points pushing themselves into the Champions League place at least temporarily they are on level with points with by Leverkusen the two of them will be battling for this spot the rest of the way, but indeed this victory and this performance gives them a sense of confidence that they will need to beat Kai Havertz and Bayern Leverkusen to the Champions League spot. After both teams won this weekend, the race is certainly on. 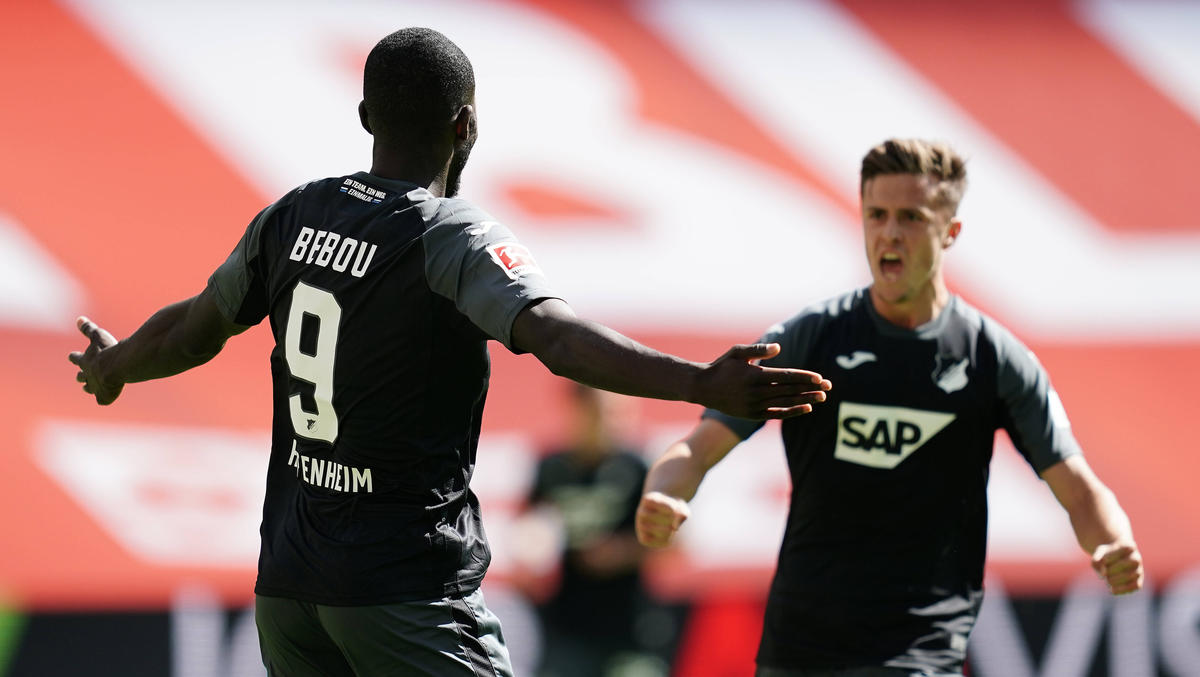 Hoffenheim recently got back on the right track as they are firing with momentum and confidence on their side. They did not have the best start when the Bundesliga opened its doors again. They got crushed in their first game and then got a wimpy draw. However, with all that being said, this team is still fighting for European football next season, and outstanding performance against FC Koln has changed their mentality and narrative quite a bit. Last weekend was to me the Christoph Baumgartner game as we saw him take his game to another level in an outstanding performance. They came out with a positive energy about them that showed their qualities. Hoffenheim has a good chance at least getting into Europa League, something that would be important for the club. Meanwhile, Mainz has struggled significantly over the last couple of games. They need points to avoid the drop; they are near the bottom of the table and need some results to change the fortune. It turned out to be an exhilarating match between two teams that were up for the challenge. Hoffenheim came out with high-energy, got into functional space is a lot, and looked effective. Hoffenheim and some pretty good chances to start the game with Roberts Skov barely missing a one-on-one and a well hit strike from the side of the box from Christoph Baumgartner. Even though he did not have the flashy performance as he did the week before, he still looked like one of the best players on the pitch as he continues to develop and grow each game. He got into some excellent spaces read the game really well and distributed. On a break, he was brought down inside the Box, winning his team a penalty Hoffenheim had an opportunity to put their foot in front in the game. However, the drama would occur as Mainz denied Hoffenheim from the penalty spot. Yet even with all that, they still managed to keep their momentum going for them. Mainz really put together some fight they wouldn’t back down, and they continue to do so throughout. They came really close on a FREE KICK at the end of the half, but unfortunately for them, Hoffenheim would find their breakthrough minutes before the second half. Hoffenheim substitute Bebeu retrieved a well-hit ball from the Midfield controlled Inside the Box did a really practical move before finding a spot into the bottom corner where he slid the ball to give Hoffenheim a 1-0 lead before the start of the second half. In the second half, it became more of a well-balanced game. Hoffenheim had many opportunities even to increase the lead. They had a scramble in the box where they had three or four strikes on goal that really should have put it away. However, Mainz wouldn’t go away; they continued to be a problem and really Showed their character in the way they fought back. Mainz had an almost goal that was denied on the line, but they never gave up; they never waiver they kept coming. Eventually, they got a Breakthrough. At least it appeared that way. After a Defender cleared the ball, Mainz scored striking on the rebound to equalize. They looked closely at the goal, and it was wiped off. The replay showed one of the forwards ran into the goalkeeper on the play affecting the play; therefore, it was wiped off. Mainz really performed in the second half; they did everything they possibly could have to try to get back in the game and looked for that winning goal. Hoffenheim was probably the better team out of the two, but it was a really tough battle at the end the Mainz goalkeeper made some big saves down the stretch as Mainz looked for that late equalizer. In the 90th minute, they had an excellent chance at the very end, but a strike went wide as the whistle blew for full-time as Mainz continues to slip down into the danger zone. At the same time, Hoffenheim look to finally have their groove back picking up another massive three points primarily once again to the brilliance of Christoph Baumgartner Hoffenheim continues to roll as a pick up maximum points In a nip-and-tuck battle against a relegation side they gave everything. Hoffenheim was the better team, but the final result did seem harsh.

Frankfurt has been one of the League’s most disappointing teams this season. Last season they finished fourth in the league, but unfortunately, after losing out on the Luka Jovic and Sebastien Haller seeing their best two players depart to Real Madrid and West Ham United, respectively. They found it really difficult to recreate the success that they had. It has been almost two months since they last picked up a victory. It took a heroic second-half comeback last week against Freiburg for them to rescue a point. It would be such a shame if this team of this stature got relegated or got dragged down to the bottom of the table. Right now, Frankfurt must do what it takes to survive the season. They would face an adamant Wolfsburg team that, despite not picking up maximum points, has outplayed the opposition and every one of their matches. In fact, only a very few amount of times this season have they been overcome. Frankfurt is looking for survival Wolfsburg still has eyes on Champions League football for next season. That is always going to be a tough task given how reliable the European teams have been this season; both of these teams needed points for different reasons. Wolfsburg had some early chances as they continued to build momentum throughout the game. Frankfurt was hanging on but occasionally came forward with some confidence. There’s no question that Frankfurt had more to lose more to lose in this game, but even though Frankfurt was outplayed by Wolfsburg significantly. Max Arnold ended up putting in another spectacular display as Wolfsburg came through with a real ruthlessness and their desire to pick up the maximum points. All the momentum was with Wolfsburg. Unfortunately, they allowed Andre Silva and Frankfurt to put themselves in front. A penalty was given after Andre Silva was taken out. Andre Silva stroke it with absolute Grace into the top corner to provide a Frankfurt with the 1-0 lead. It was the only shot they had in the entire first half. Nonetheless, Andre Silva did a lot of good work without the ball as he was the silver lining of the first half. In the second half Frankfurt, we’re more in the game for while Wolfsburg’s tone and mentality remain unchanged. Wolfsburg would eventually find their way back into the game. Off yet another set-piece. Max Arnold scored on three separate at set-pieces last week with a goal and two assists in a really outstanding performance against Bayern Leverkusen. Max Arnold delivered the goods once again, supplying a perfect cross from the wing into the box that ended up in the back of the net as Mbadu connected on the header has Wolfsburg got back into the game. It was looking like Frankfurt; it’s going to have to extend their winnless run. It had been almost two months, and it looked like they were heading in that direction. The Equalizer ignited Wolfsburg, who continue to come close on a variety of attempts to push themselves in front. Some really crucial misses in the first half and at different points in the second half really prove to be the difference. There is no questioning that Wolfsburg was the better team and deserved the maximum marks in the match. They completely dominated Frankfurt, but one opportunity screwed up everything for Wolfsburg. Miscommunication Inside the Box allowed Kamada to beat the keeper late in the second half to give a Frankfurter a 2-1 lead. Frankfurt finally did it; they beat a strong Wolfsburg team as they won their first match in 2 months as Frankfurt put a dent and Wolfsburg Ambitions for Champions League football.