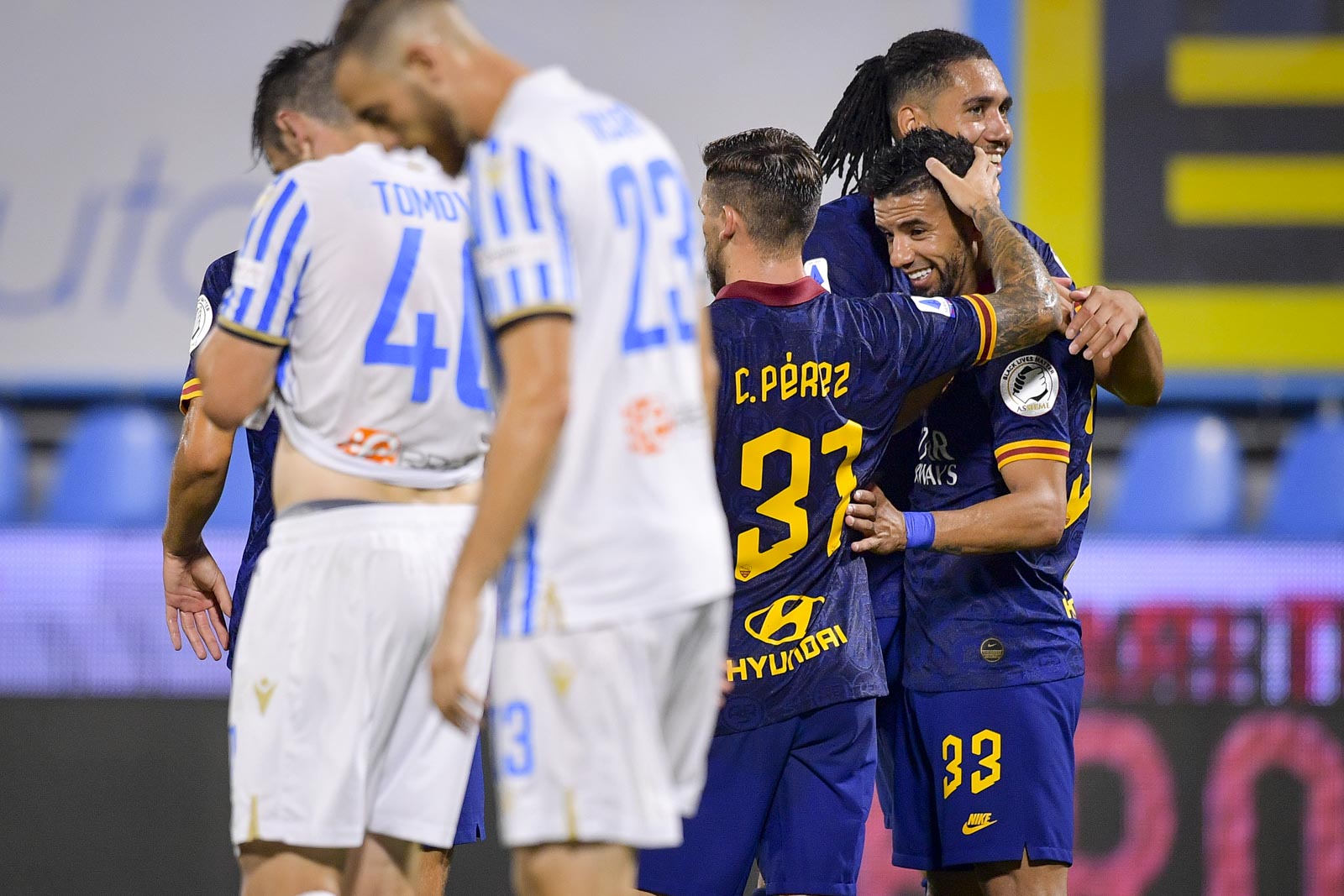 Following victories in three of Roma’s last four games, Roma continues to try to drive their momentum in the Europa League Chase. Over the weekend, they earned a point against Inter Milan despite outplaying them the majority of the match. So when Roma arrived to take on already-relegated SPAL, they were inspired and ready to take their anger out on a team that had nothing to fight for. Very early in the game, Nikola kalinic gave Roma a 1-0 lead. The Croatian Striker, who was starting in place for edin Dzeko was in the right place at the right time as he sticks a Lorenzo Pellegrini rebound into the back of the net. Surprisingly spal get themselves back in the game with an outstanding headed goal as they equalize. It was nothing but downhill from there for the hosts. At the end of the first half, Carles Perez cuts into the box before scoring his first goal in Italian football, giving Roma a 2-1 lead at half-time. In the second half, the Romans exploded, only producing more misery on a team that has already faced the reality that they are going to be relegated. Alex Kolarov Struck from distance to give Roma a 3-1 lead. Following his goal, it was bombs away. Bruno Peres scores twice, and on the last attack of the game, Nicolo zaniolo takes the ball through the majority of the pitch ending in a breakaway goal, one of the best goals seen this Season as Roma punish spal again and again in what was a 6-1 annihilation. Roma gets back into winning ways collecting all the points in a genuinely one-sided affair in spal. Roma was not at full strength and still managed to score 6 a testament of Paulo Fonseca and the form his team is in. 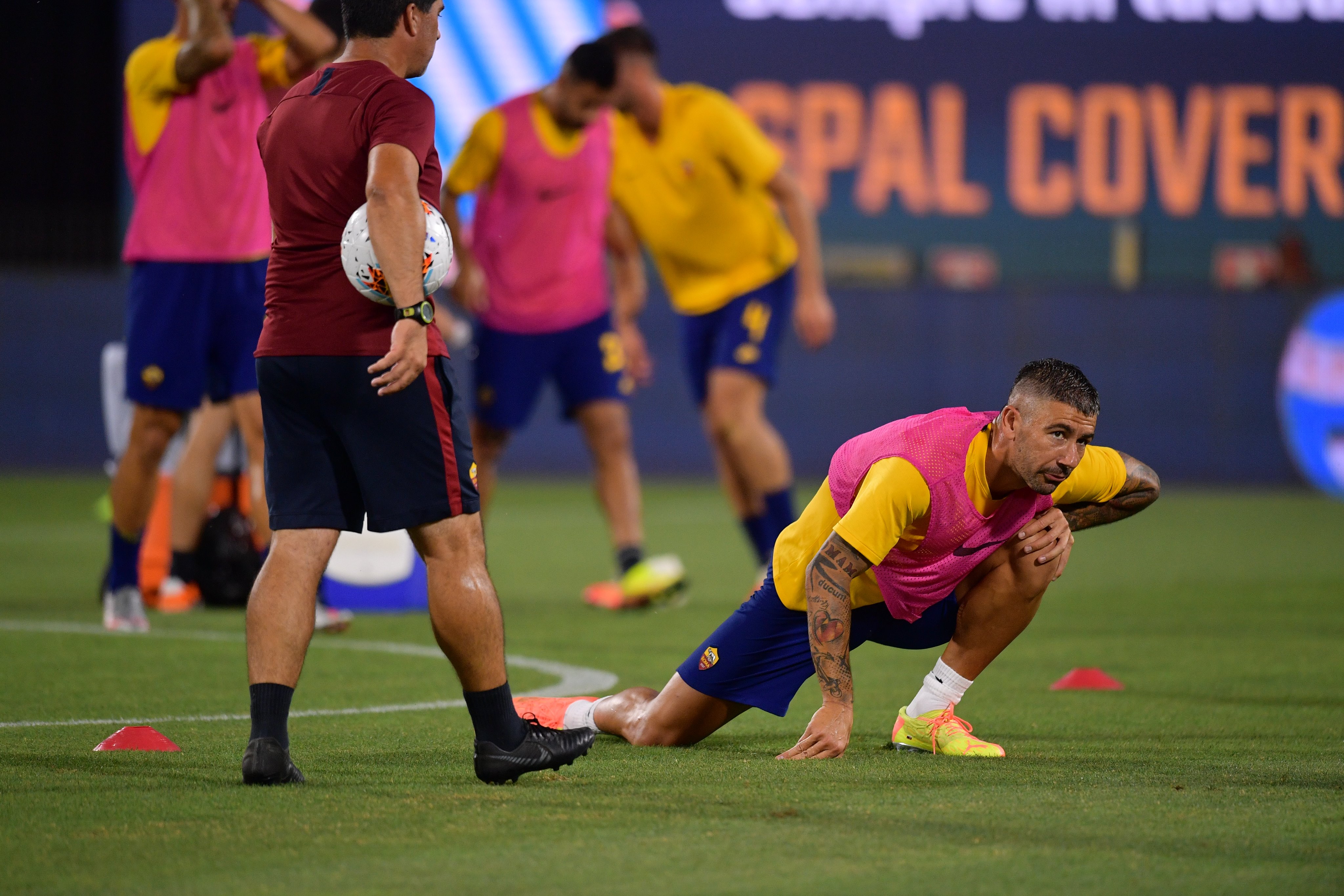 Paulo Fonseca once again went with his typical 3-4-2-1 formation out of this match. He would make four changes giving some rest to a few different players. In goal as always would be Paul Lopez as the Spaniard maintains his post in goal. In Roma’s back 3 we would see Chris Smalling return to the starting lineup as the team’s center-back beside him would be Alex Kolarov on the left and Gianluca Mancini on the right. Leo spinazzola and Bruno Peres would act as the team’s wing-backs. In the defensive Midfield, Jordan Veretout would be rested as Bryan cristante comes in to play as a partner with Diawara. In the attacking Midfield, it would be Carles Perez and Lorenzo Pellegrini. With mikatarian being rested. Then upfront, as the central Striker would be Nikola kalinic as edin Dzeko also starts on the bench. 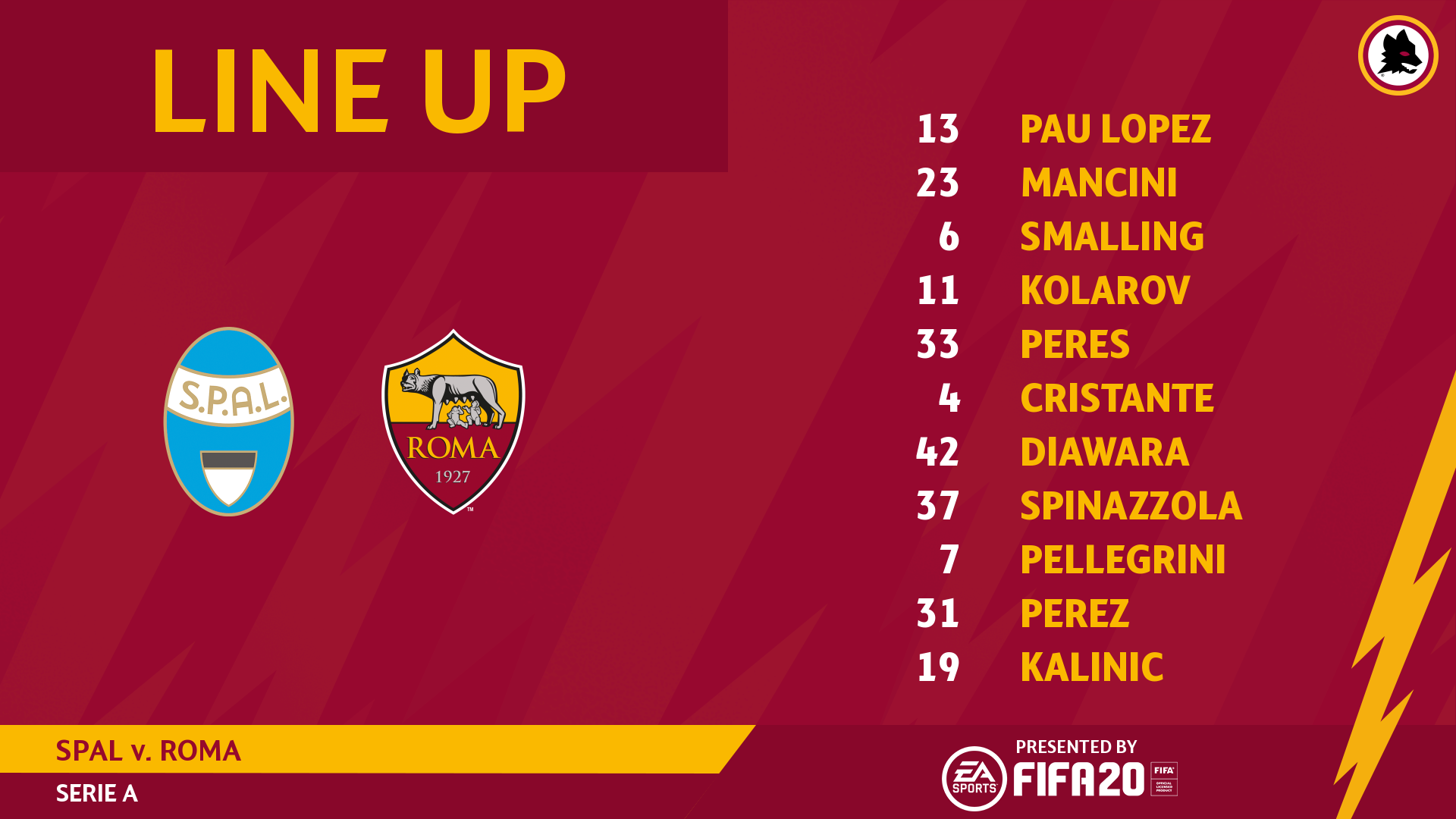 After preparations and predictions, the match was just about to get underway at the Stadio Paolo Mazza. With spal already mathematically relegated, Roma had to feel optimistic going into the game. They struck early and look dangerous most of the first half. After seeing Leo spinazzola get an early shot blocked, Roma took advantage almost immediately. In just the 10th minute, Roma took the lead, pushing themselves in front. Inside the Box, Carlos Perez set up Lorenzo Pellegrini, who struck the ball out of the air to try to get his shot past the keeper. On the rebound, Nikola kalinic stuck his foot out, putting the ball into the back of the net to give Roma a 1-0 lead. Video review was consulted as there was potentially an offside or a foul on the play. After a few minutes, the goal was confirmed after no obstruction was called. It would be Nikola kalinic fourth goal of the Season. He hasn’t exactly been what he was expected to do when he came to Roma in the summer; however, he has scored in his last two starts. Roma had significant control throughout large portions of the first half. They dominated possession and looked great coming forward. Pau Lopez got into some dodgy situations, and the backline wasn’t as together as it has been the last few games. However, Chris Smalling was sufficient coming up with some big defensive plays down the stretch; nonetheless, it was a struggle with Rodger Ibanez out of the lineup. Bryan cristante came really close striking from distance before spal got an opportunity that they did not waste. Spal had very few opportunities to score in the first half; they beat the Roma backline with a cross from outside the box that ended with the head of Cerri, who scored a sensational header as the already-relegated side by surprise got a goal back. Despite conceding Roma did look like the better team as they pressed forward and created a lot of high-quality chances it was only going to be a matter of time before they were back in front, They were back in front again. However, with that being said, spal did perform much better than anyone really was expecting. Shortly after the goal, Kolarov came within inches, hitting a malicious strike from outside the box, nearly helping Roma retake the lead. Late in the first half in the 38th minute, Roma was able to retake the lead through Carles Perez, who outran his Defender before striking a bullet into the back of the net from inside the box to give Roma a 2-1 lead. It would be his first goal in Serie A. It was a fantastic run and strike to give the lead heading into the second half thanks to goals from Carlos Perez and Nikola kalinic. 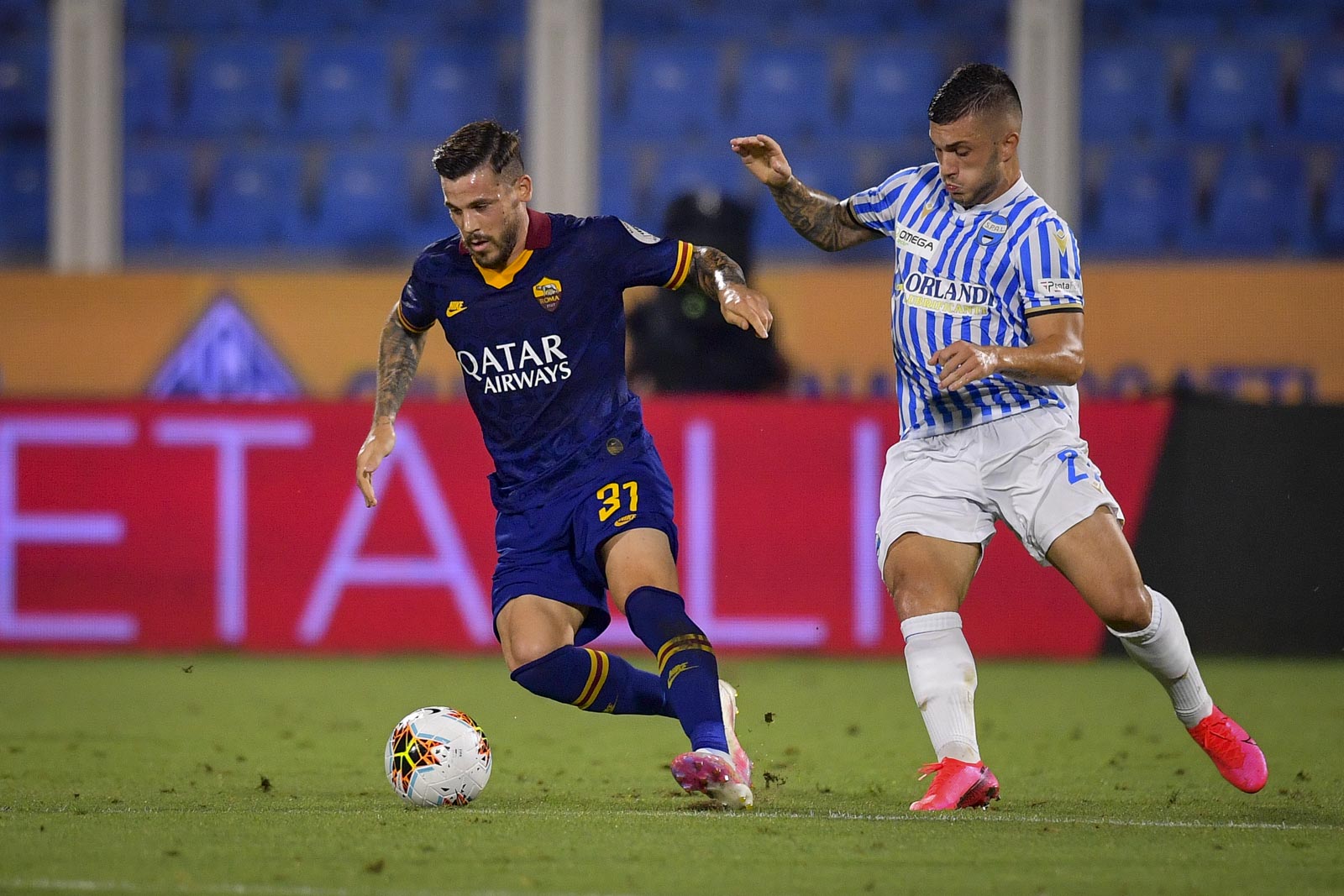 It was somewhat of a sloppy first half, but none the less they found themselves in front after the first half. In the second half, they turned a corner as they looked much more efficient and More in control of themselves. It didn’t take very long for Roma to put the game away. It took them just minutes. In 47th minute Kolarov hit a deep strike from outside the box that found the back of the net giving Roma a 3-1 lead. The Romans had more or less wrapped up the points as the Serbian scored his eighth goal of the Season. It was utter domination in the second half the match got truly out of hand Roma controlled the Midfield pressed High and converted over and over again on the break in the 52nd minute Bruno Peres finished off the attack as Roma ran out to a 4-1 lead. The Romans continue to dominate, and every once in awhile, spal would attack the Roma backline. Spal was absolutely destroyed, and it didn’t even seem at times like they were trying. With their future already being decided, they didn’t have fight left in them. Gonzalo Villar and Nicolo zaniolo enter the game shortly after the goal. With Lorenzo Pellegrini and Gianluca Mancini being sacrificed. Chances were being exchanged by both teams, but Roma did seem to be the more Superior as they continued to attack a vulnerable backline. The points were already basically done for, and all Roma needed to do is see this out however, the vulnerability of them allowed Rome even to add more misery. David zappacosta picked out a cross for Bruno Peres, who scored his second of the game as Roma took a 5-1 lead. It was his second goal of the game as Bruno Peres was absolutely breathtaking in the second half. Spal just wanted things to end as they couldn’t hold off the thrust of the Roma attack. In the 90th minute, Nicolo zaniolo scored one of the best goals we have seen on Italian soil this Season. After Chris Smalling picked out a pass for the young Italian, he took the ball from one end of the pitch to another going around Defenders cutting into the box before taking his time surveying around the defense before slicing the ball into the back of the net to give Roma a 6-1 lead. It would be his seventh goal of the Season as the youngster gives spal the kiss of death. Roma hangs six on SPAL in what was a total Annihilation as Roma Stay hot. The Romans are unbeaten in their last five Paulo Fonseca has figured out the cheat code.

Roma expoldes in the secoed half, Kolarov scores, Bruno Scores a Brace and Zaniolo scores a worldie as Roma pile it on

Roma significantly outplayed Inter Milan on Sunday despite not getting the points it showed what type of form this team is in. With a much more challenging game this weekend against Florentina. Paulo Fonseca kept his form but was able to rest some key pieces ahead of the game on the weekend. Even though edin Dzeko, Hendrick Mkhitaryan, Rodger Ibanez, and Jordan veretout all were rested and did not play a minute. Roma had no problem whatsoever getting to the end of the line in this game. There were some concerns defensively in the first half, and Lopez had a very sloppy match that ultimately forced Chris Smalling having to make to goal-line save. However, outside of that. Roma kept their fine form going and a really pulverized a team that has already mathematically been relegated. It ended up producing Roma’s highest-scoring game in years. Roma hangs six on spal Nikola kalinic scoring in Dzeko’s absence. Bruno Peres scoring twice Carlos Perez scoring his first Serie A goal and unbelievable goal at the end of the game by Nicolo zaniolo, who came off the bench and scores that came along with an Kolarov strike. It was only a goal difference going into the second half, but the Romans truly Unleashed in the second half, making them pay repeatedly. The man of the match tonight could go to practically anyone Roma are unbelievable despite the quality of the team it keeps Roma in their position with a 2 point difference from AC Milan Napoli no longer seems to be a problem because they drop points today. It was an excellent all-around performance; the quality of the other team is irrelevant as you can only play what’s in front of you. Taking up these points is especially important because it’s possible they could go unbeaten and the rest of the Season. Juventus probably will have the league title wrapped up by the time Roma plays them outside of that they have three winnable games left on the schedule. This gives them a great chance to stay in their position. The man of the match tonight goes to Diawara. Even though he was subbed off in the second half, I thought he played a significant role in Roma stacking up the goals the way he controls the Midfield as well as spreading the game open, allowing Roma just to destroy spal away from home. Paulo Fonseca shrugs off the points dropped over the weekend and keeps this momentum going.

MAN OF THE MATCH: Adamou Diawara 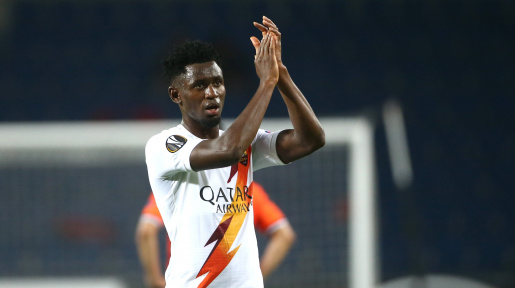 Next: Vs Florentina Sunday July 26th