In Serie A, we had one of the most anticipated matches of the weekend as New look AC Milan welcomed Bologna to the San Siro. Milan has done incredible business in the transfer market, and it’s only intensified since the summer they brought in so many good pieces on an already solid team against Bologna that has upgraded and look incredibly strong in for a very productive campaign. It was precisely what AC Milan needed a test to kick off the season. It was a Zlatan Ibrahimovic kind of day. Thirty-eight years old but still playing like half his age, aging like fine wine. Early in the game, Calabria releases Ibrahimovic Inside the Box as the old man tries to strike away from his body, missing the mark buy only inches. AC Milan has the majority of control even though Bologna had some qualities and tested donnarumma at different points of the game. AC Milan had a fantastic opportunity wasted as Bennacer missed in front of the goal that indeed he should have stuck in the back of the net. Before not too long, the moment arrived. Theo Hernandez sent a beautiful cross into the Box as big powerful is Zlatan Ibrahimovic powers above everyone connecting on the header into the back of the net to give AC Milan a 1-0 lead. Milan continues to test them in the second half with some great opportunities. Łukasz Skorupski makes things difficult at times, commanding himself in the bologna goal. However, AC Milan had an opportunity to double their lead from a penalty inside the Box. Zlatan Ibrahimovic stepped out and blasted the strike into the top corner as he gets his brace as Milan doubled the lead. Bologna had some chances down the stretch as well as AC Milan. Ibrahimovic, late on, had an opportunity to add to the lead on a break with so much space and time to execute but Ibrahimovic unable to get his third. Sandro tonali and Ibrahim Diaz both came on in the second half to make their debut, but the big story is Zlatan Ibrahimovic is still that good as Milan gets an awe-inspiring 2-0 Victory against a team that will push for the top half of the table once again. Stefano Pioli side outclasses Mikhailovich and a firm bologna team as AC Milan gets off to a roaring start.

The Premier League had just started just a few weeks ago, and already one of the most anticipated and exciting matches took place this weekend. Liverpool is coming off a premier league title for the first time in 30 years. One of the best sides we have seen in English football with a loaded attack, Guided by Jurgen Klopp, is the best defender in the world, one of the best in the business. Despite all the praise that deserves the last season, they had a rocky start to kick off this season. Newly-promoted Leeds United, led by Marcelo Bielsa, gave the defending Champion fits, scoring on every shot they took. Fortunately, Mohamed Salah was at his best, scoring a hat-trick. Meanwhile, Chelsea had one of the most anticipated teams this season with an incredible transfer window; after not spending for the last couple of transfer windows, they loaded up with Timo Werner, Kai havertz, Thiago Silva, Ben Chilwell, and many others. They got off to a good start with a 3-1 victory over Brighton to start the campaign. This weekend we saw a battle between the defending champions. One of the most exciting and compelling title challengers in Chelsea. Liverpool had signed Thiago before the game after winning the treble with Bayern Munich last season. He started on the bench as these two teams went to battle. It was a very evenly matched game from the jump. Both teams exchanging chances left and right. Early we saw another mistake by Kepa, who looks to be replaced sooner rather than later considering all the mistakes he’s made. He came out the Box trying to run out the attack only to be bailed out by Christensen, who got in front of the goal to be deflected. Even though Liverpool controlled the Midfield and, for the most part, Chelsea showed their qualities had some great chances. Timo Werner came through on a Counterattack, becoming really close and then another attempt where his shot was inches away. Then drama occurred when sadio Mane got a counter when Christensen took him out; he was given a RED card as it was a clear goal-scoring opportunity. It ended up being a goalless first half, but early in the second half, Liverpool found life. Took advantage as Roberto firmino connected with Mouhamed Salah picked out a path sending A cross into the Box that met the head of sadio Mane in what was a brilliant goal. On top of that, Liverpool controls the game despite Chelsea having them moments and making things challenging for Liverpool at times. Thiago entered the action and made a difference. Unfortunately for Chelsea, a few minutes later, Kepa would make a catastrophic error passing out from the back to be picked off by sadio Mane again, putting the ball into the back of the net Liverpool took a 2-0 lead. Thiago was having a fantastic outing as he completed more passes in the second half then Chelsea had in the entire game. But he conceded a penalty as Timo Werner was taken out in the Box. Jorgino stepped up, but he was denied from the penalty spot for the first time in his Chelsea career. They would be an exchange of chances from both but Liverpool held on earn a 2-0 victory. Despite taking up the points, it wasn’t the most complete performance from Liverpool, but it’s enough to get the job done. Can Chelsea get it together with a goalkeeping change, and what does Liverpool really need to do to look more like they did last season after two somewhat underwhelming performances. An excellent match of football with drama with storylines that will continue to be written about both these sides this season. 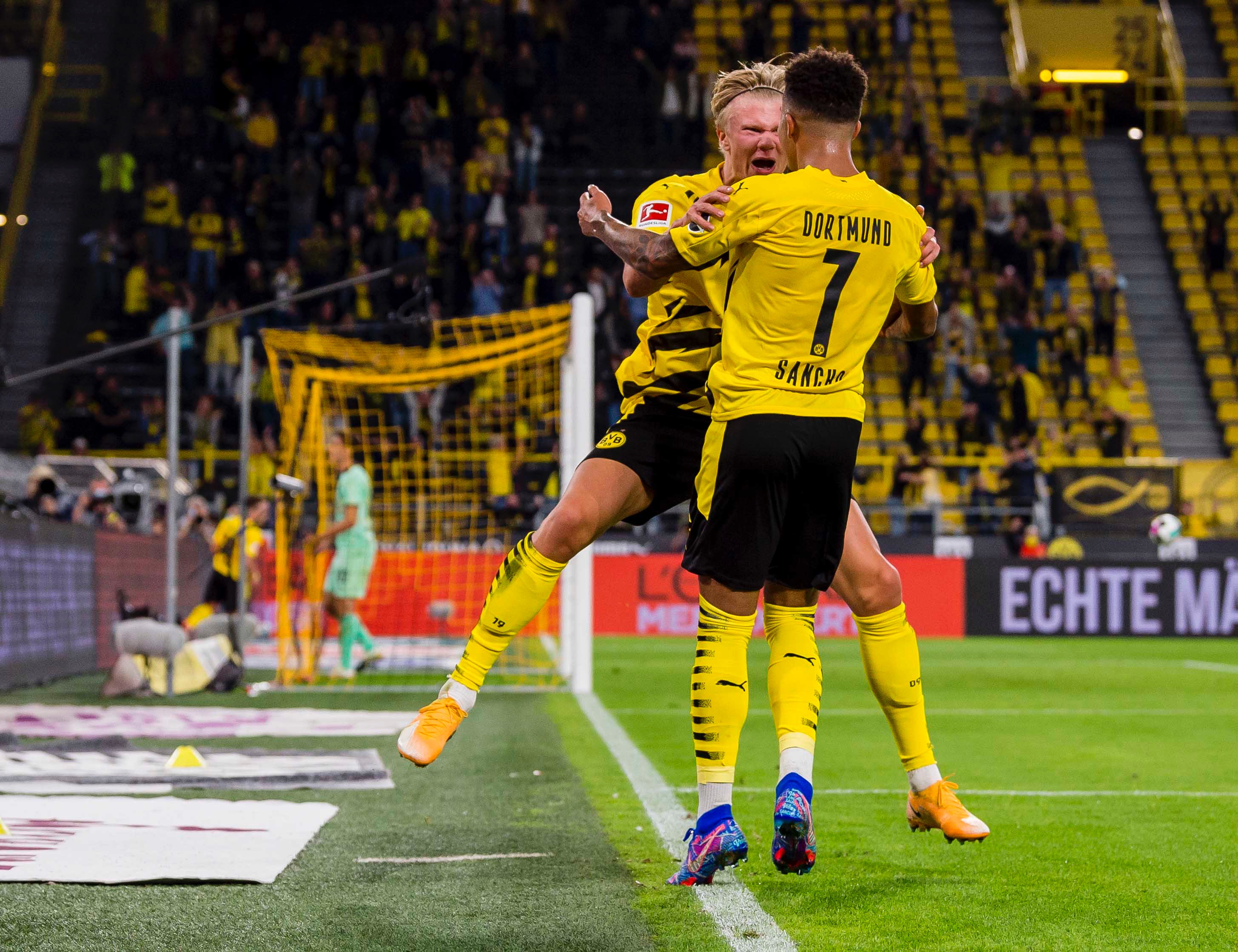 The Bundesliga kicked off this weekend officially as they started a new campaign. Borussia Dortmund, the last several seasons, has come close to Conquering the Bundesliga title that they desire. They were in control for most of the season but late on, the Resurgence of Hans flick being put in charge at Bayern Munich saw the German Giants retain the title when it could have gone to Dortmund based on the gap they had at the top of the table. They will be another opportunity for Dortmund to try to reach the Glory that they had many years ago to end Bayern Munich once and for all finally. They kept Jadon Sancho; they signed Jude Bellingham from Birmingham city and have a young Gio Reyna looking for a break out season. They hosted Gladbach, another team that is going to fight for the title. A Champions League-level team an excellent test for the first match of the season. Dortmund had early moments in which they look like they could score. Haaland came close, putting his head through a free-kick as he tried to get the campaign back on the right foot. Gladbach had a few chances but mostly Dortmund hand control. The youngsters really where the story of the evening with Gio Reyna, the American seventeen-year-old, and Jude Bellingham, the English teenager, really showing high quality in the early part of the match. They slowly but surely would chip away and looked like a goal was bound to come eventually. Just a minute after Haaland came close on the free-kick they got on the break, the young Norwegian ran after trying to strike but just misfiring on the goal’s side. The youngster really looks sharp and tries to recreate some of the success he had last season. After a scramble in the box, a strong defensive display denied the visitors despite a small scare. Then just a couple minutes past the half-hour, Dortmund executed a perfect attack a cross coming into the box a touch by Gio Reyna that fell to the feet of Jude Bellingham as Gio Reyna made his run before retrieving the ball just inside the box tucking the ball into the bottom corner to give Dortmund a 1-0 lead. It would be the American prodigy his first Bundesliga goal after scoring in the German cup just a few days earlier. The English teenager and the American Teenager connect on the opening goal. Sancho came close not long after, but his header coming off a cross was a little high. It was clear that Dortmund had the momentum in the first half more or less had to control the game. In the second half and only continued, Emre Can ran down the wings before trying to supply a ball in the Box Dortmund tried to strike on a rebound but were denied a goal-line save. Dortmund looked all the part. It was a really strong performance, but they weren’t finished. Gio Reyna went on a terrific run inside the box. He was clipped, ultimately leading to a penalty. Haaland stepped up with a flawlessly executing a penalty, slotting the ball into the bottom corner to give Dortmund a 2-0 lead. It was more or less the same all the way through late in the match. Sancho gave them the kiss of death in an incredible pacy rundown the wing beating the Defenders all on his own before supplying a perfectly time ball into Haaland, who drilled a strike in the back of the net getting his brace. Dortmund made a big statement against a strong team as Dortmund comes through with a dominating 3-0 victory the kicking off the new campaign in dramatic fashion. With one heck of a performance. Can they push Bayern? Only time will tell.