One of the most anticipated matches of the weekend was between two heavyweights of Italian football. These two teams are looking to chase down that elusive league title at the end of the season, potentially being the ones to dethrone the mighty Juventus. Title favorite Inter Milan hosted Lazio at the San Siro this weekend. It was a cinematic match with any drama excitement and a battle between two Italian football heavyweights. Inter Milan finished second last season, just one point off the top. This Inter Milan is a team that is positioning themselves for the league title this season. They will be hosting a Lazio team with the League’s Best Striker, Ciro immobile, a strong Midfield, solid defense, and an all-around great team. Their transfer policy did not go well this season, but they still have the capabilities to be in this title race. It hasn’t been the best start for them, but this match was about getting back on the right track. It seemed to be a nip-and-tuck battle between these teams that wanted to soar to initiate some superiority. Lazio got forward really well and had a nice look at the goal when Lazzari set up Luis Alberto, who saw a strike from inside the box controlled and dealt with by Samir handanovic. Later on, Inter Milan tried to hit back on a counter-attack that saw a Martinez strikeout of the air mist by mere inches. There was no real superiority from either team it was a match that seems to be split right down the middle. After chances being shared on both ends, Inter Milan could take the lead Martinez would retrieve the ball inside the box in a difficult position; the Argentines rocket taking a slight bounce that slid underneath Thomas strakosha as Inter Milan took a 1-0 lead. Just past the half-hour mark, inter were in front; however, Lazio was still very much in this game, and they proved it with some high-quality chances down the stretch. However, before that, romelu Lukaku came within inches of doubling The Inter Milan lead as his strike, and no man’s land just nearly missed. Had he converted, the match’s result could have been different, but you can’t fault Lukaku either it was a very well hit shot. Inter Milan took that lead into the second half but at the right place at the right time was milinkovic-savic that leveled the game. Francesco acerbi from just outside the box sent a perfect cross Into the Danger area milinkovic-savic connected on the headers through the air beating Samir handanovic at his far post equalizing for Lazio as things were all evened up at the Stadio Olimpico. Lazio returns once again with the header that was inches away as they were starting to build on their momentum. Lazio came forward yet also and Ciro immobile struck at The Inter Milan goal with velocity; despite not scoring Lazio, we’re starting to pull away and show their superiority. Drama Unleashed late in the game. Arturo Vidal took down ciro immobile the Chilean midfielder came to check on him when he was struck by the boot of the Italian. he was sent off with a red card. I think it was slightly an overreaction; he definitely should have been booked, but he didn’t connect with Arturo Vidal straight on, but given the situation, I think it should have been a yellow. Lazio was reduced to 10 men late on. Marcelo brozovic nearly gave Inter Milan the winner when his strike hit the crossbar inside and what could have been the game-winning goal. Then in stoppage time, it was more drama as Sensi was given the red card. Patric got in his face when he was at a throw-in; the midfielder pushed him, the Lazio player overreacted, and he was given a red card. I thought both red cards were a bit harsh, and I don’t think either one of them deserves a lengthy suspension. The whistle blew as Inter Milan, and Lazio split points at the Stadio Olimpico. 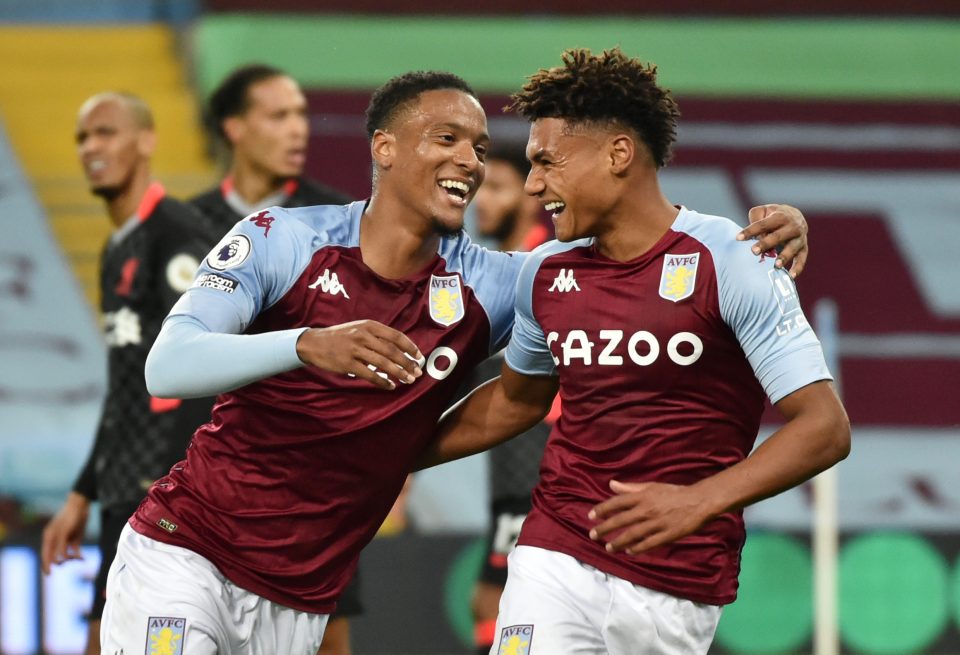 Liverpool attempted to keep their hot run to start the season going when they made an Aston Villa trip. A team that almost got relegated last season and, on top of that, manage to keep their Captain Jack Grealish linked to Manchester United. However, despite Liverpool’s hot start, they haven’t looked all that impressed this season; they have picked up the points, but there is something off about this team so far. They were about to have a rude awakening. As it has been a rather strange Premier League season this so far, Manchester United conceding six and Manchester City conceding five at different points this season. This was a crazy match that turned out to be a considerable shocker across English football. Aston Villa went into this game as heavy Underdog, but they found their moments, and there were a lot of moments. Liverpool backup Adrian made a catastrophic error on a path picked off by Aston Villa Grealish set up Ollie Watkins, who converted his strike into an open net to give Aston Villa a 1-0 lead. Just four minutes into the game. Unfortunately, this is only the beginning. Aston Villa struck again a little later on a break Jack Grealish set up his team on the counter-attack; Ollie Watkins again cut into the box, converting a sliding strike from the ground into the top Corner as Aston Villa ran out to a 2-0 lead. Liverpool responded as Mo Salah gave Liverpool a fighting chance with a strike. However, it became ugly after that Liverpool looked uninterested, lacking focus. It just didn’t have that killer instinct Mo Salah was the only player on Liverpool that made any impact whatsoever. On a corner that was shot out, John McGinn struck for the outside the box, taking a slight deflection that ended up in the back of the net as Aston Villa took a 3-1 lead then it became four across Inside the Box met the head of Ollie Watkins that connected his header into an empty net to give Aston Villa and incredible 4-1 lead. Aston Villa’s new signing gets a hat-trick before the end of the first half. 10 minutes into the second half Aston Villa scored yet again as Ross Barkley saw his strike deflected but still converted, making it 5-1 Aston Villa. I truly egregious performance from Liverpool. Mo Salah, on the counter, converted, getting a second goal for Liverpool. Only a breather in between Aston Villa finished thing them off as Jack Grealish scored twice in what ended up being a 72 victory for Aston Villa. Aston Villa has been really good this season and is in the top three, at least for the moment. While Liverpool, a team with an embarrassment of riches, got humiliated at Villa Park.

Bayern Munich, the most destructible team in Europe, was shocked when they were brushed aside by Hoffenheim. However, that did not have Bayern Munich down for so long that they beat Borussia Dortmund in the super cup in a very exciting and thrilling 3-2 victory for the Bavarians. They returned it to Bundesliga action this week to take on Hertha Berlin. It turned out to be one of the most exciting matches of the Bundesliga this weekend. Bayern Munich looks incredible going forward and really cut into the box on multiple occasions on the verge of scoring. However, Hertha Berlin was not going to lie down and let them dictate the game. It turned out to be a fascinating back-and-forth battle between two teams that we’re fighting for every inch. The goalkeeping display from Hertha Berlin early in the match was absolutely outstanding. Robert Lewandowski was denied multiple times in front of the goal by the heroic saves. Many close net opportunities brushed Away by a goalkeeper having the game of his life that he’s in the first half. Berlin kept Bayern Munich at arm’s length and even orchestrated a few chances of Their Own. Hertha Berlin even went out of breakaway that ended up with a ball just missing by inches. Had a bit more accurate on the Finish, they would have taken the League as it was out of the reach of Manuel Neuer. Finally Bayern Munich broke through the initial strike by Robert Lewandowski what’s a, but the defense did not pick up the slack as Bayern Munich sent a cross into the box to find the foot of Robert Lewandowski as his trial rip through the top of the net to give Bayern Munich a 1-0 lead right before halftime. Five minutes into the second half American Teenager Richards picked out a pass for Robert Lewandowski, who came across just inside the box, striking the ball into the bottom corner to double the Bayern Munich lead, scoring his second of the game. Just eight minutes later, person Berlin got themselves back into the game on a free kick Cuhna connected with a perfect cross into the box as Cordoba rose up, converting a beautiful header that had placement and accuracy outside average from Manuel Neuer as her to Berlin and got themselves back into the game. With just 20 minutes to go, Mathias Cuhna orchestrates a short pass just outside the box fed back into him inside the box, creating a one-on-one as he converts in front of the goal to draw things level after being two goals down. With 7 minutes to go, Lewandowski comes through and converts off a free-kick after a late touch from Thomas Muller as Bayern Munich takes a 3-2 lead as Robert Lewandowski completes his hat trick. With just minutes to go, Ngankam converted on a header that ripped through the bottom corner as Hertha Berlin equalized yet again in what is a 3-3 thriller. Hertha Berlin looks like they’re going to steal a point, and then late on, Robert Lewandowski was taken down in the box, and I think you know the rest. In the 90th minute, Robert Lewandowski scores his fourth from the spot as Bayern Munich win a wild 4-3 victory; as incredible as it may be, it proves that this Bayern Munich team is beatable a heroic performance by Hertha Berlin who deserves our respect and a lot of credit even if they came up short as Bayern Munich wins a wild one at the Allianz Arena.