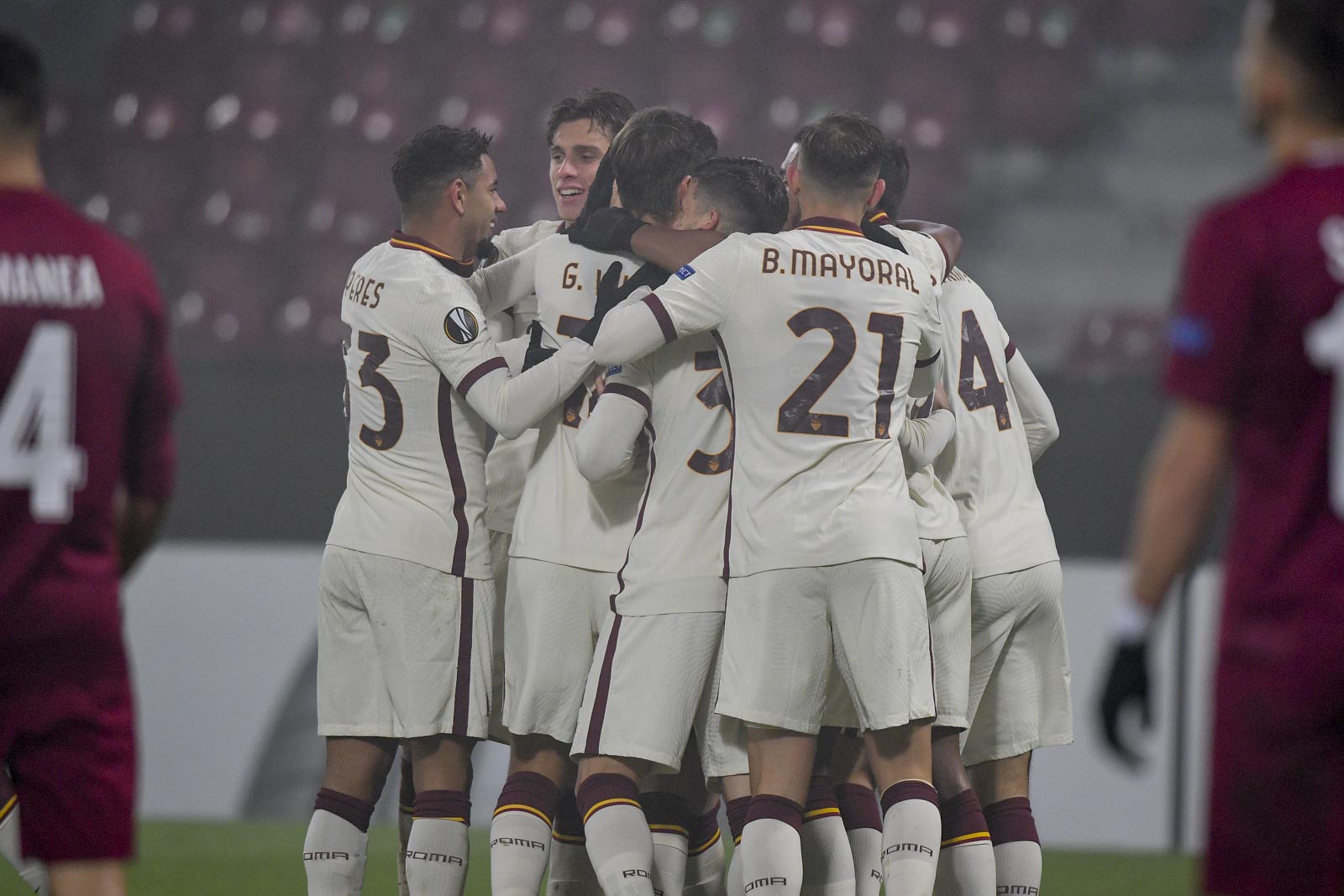 Following a dominating 3-0 Victory against Parma, Roma returns to the Europa League action to put themselves through to the next round. With three points, the Romans would more or less do that. Roma traveled to Romania to face CFR Cluj, a stormy and uncomfortable game, at least for part of it. The reverse match up at the Stadio Olimpico Roma beat them up in a 5-0 demolition. It is a match that gave Roma difficulty at times but still looked relatively superior to the Romanians. It was kind of a sloppy and unenthusiastic opening first half with only one chance the score for either team. in the second half, Roma made some adjustments that eventually paid off. The introduction of Jordan veretout changes the Outlook of the game. Early in the second half, he sent a beautiful free-kick into the back of the net, but the Frenchman goal was ruled as an own goal.. Giving Roma the 1-0 lead. The game opened up much more freely as Roma looked much more comfortable with the game despite the weather conditions. CFR did push a couple of times and made Pau Lopez react to it, but it was seemingly one-way traffic. Late on, with a little more than 20 minutes to go, henrikh Mkhitaryan was taken out, and Roma was given a penalty. Jordan veretout had an opportunity to get back the goal that the midfielder stepped up, converting placing a ball exquisitely in the back of the net to give Roma a 2-0 lead. Roma brought on some youngsters as Roma saw the game out. Roma picks up three points, winning 2-0 in rainy Romania. As Roma increases their points at the top of group A, they now sit on top with 10 points, clinching a spot in the Round of 32. 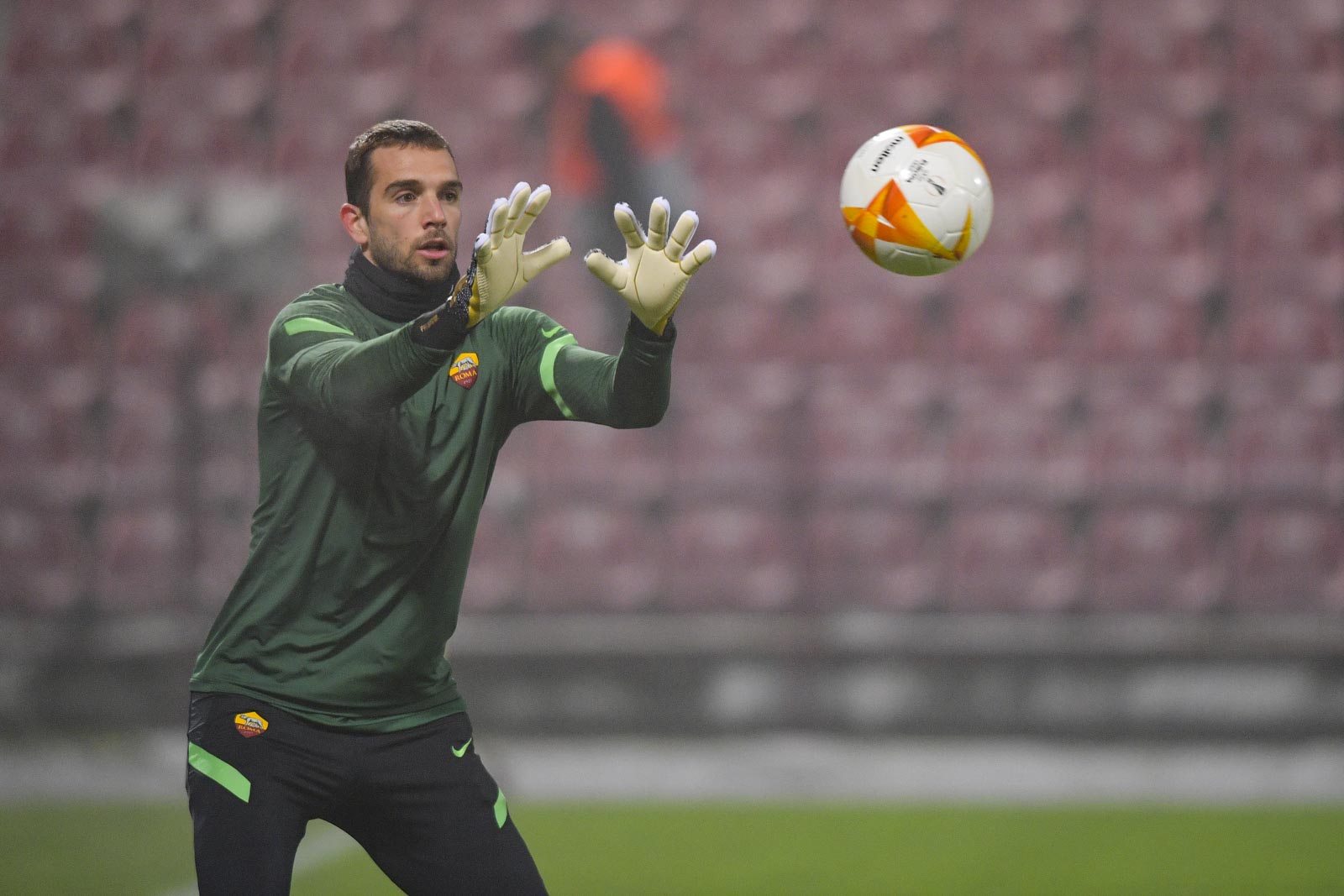 Paulo Fonseca would maintain his typical formation for this Europa League Clash. However, he has minimal defensive options this evening, and she has had to be very creative with this lineup. In goal as always in the Europa League would be Roma as a regular starter, the Spaniard Pau Lopez. None of Romans 3 starting center-backs for their two others that typically get game time in that position would be available. The three center-backs would consist of Bryan cristante in the middle, Juan Jesus on the left, and Leo spinazzola dropping back as their third center back. In at left wing-back would be youngster Riccardo Calafiori has he is just recovered from covid-19 making his second ever start for the Romans. On the opposite side would be Bruno Perez at the right one back. In the defensive, Midfield would be the duo of Gonzalo Villar and Diawara in on the left-wing upfront. The striker would be Carles Perez, then on the opposite side, Lorenzo Pellegrini getting his first start since he recovered from covid-19. Then upfront as the main Striker golf course in the weekend against Parma would be bojar mayoral. He scored a brace in his last Europa League start. Then on the bench, if needed, would be edin Dzeko, henrikh Mkhitaryan Pedro Rodriguez, among others.

After preparations and predictions, the match was just about to get underway as the Romanian Champions CFR Cluj hosted Roma on a Thursday night. It was kind of disastrous weather conditions. Very gloomy foggy light rain throughout the first half. It made things have been complicated in terms of chances or the lack of changes to what we saw. They were only a few opportunities throughout the first half and only two legitimate chances. Roma completely controls possession, basically able to dictate what they did. There were not that many changes based on how CFR Cluj was trying to put bodies on top of bodies in the box, making things difficult on Roma. To the surprise, CFR had most of the first half chances; however, none of them accounted for anything. Pereira tried striking from outside the box in the opening 5 minutes but did not have accuracy as Lopez was not even tested. Shortly after another Miss from the Romanians, they were just shooting for the sake of it all their chances in the early Goings what not of high-quality. Roma continues to push forward and occasionally got in some areas to be effective but didn’t put anything together concrete. It a half-hour mark CFR missed yet again; Lopez was not being tested in any way. Rome accident off of getting themselves into dangerous areas there wasn’t a problem converting but the weather conditions at the way the Romanians were defending made things a little complicated. We saw the first chance of the game from bojar mayoral, who got the ball inside the box from an obscure angle; the Spaniard struck with power, but the ball’s wetness prevented a really clean look. That goalkeeper got his hand to it despite the slipperiness, and they cleared out the situation. Then late on and first half, Lorenzo Pellegrini came close with a strike from deep. It seems like Roma would inevitably convert Rather a dry game that did not have much excitement to avoid 5 minutes; the weather conditions obviously primarily impacted the way the game was being played; after 45 minutes, it was a 0-0 draw in rainy Romania. 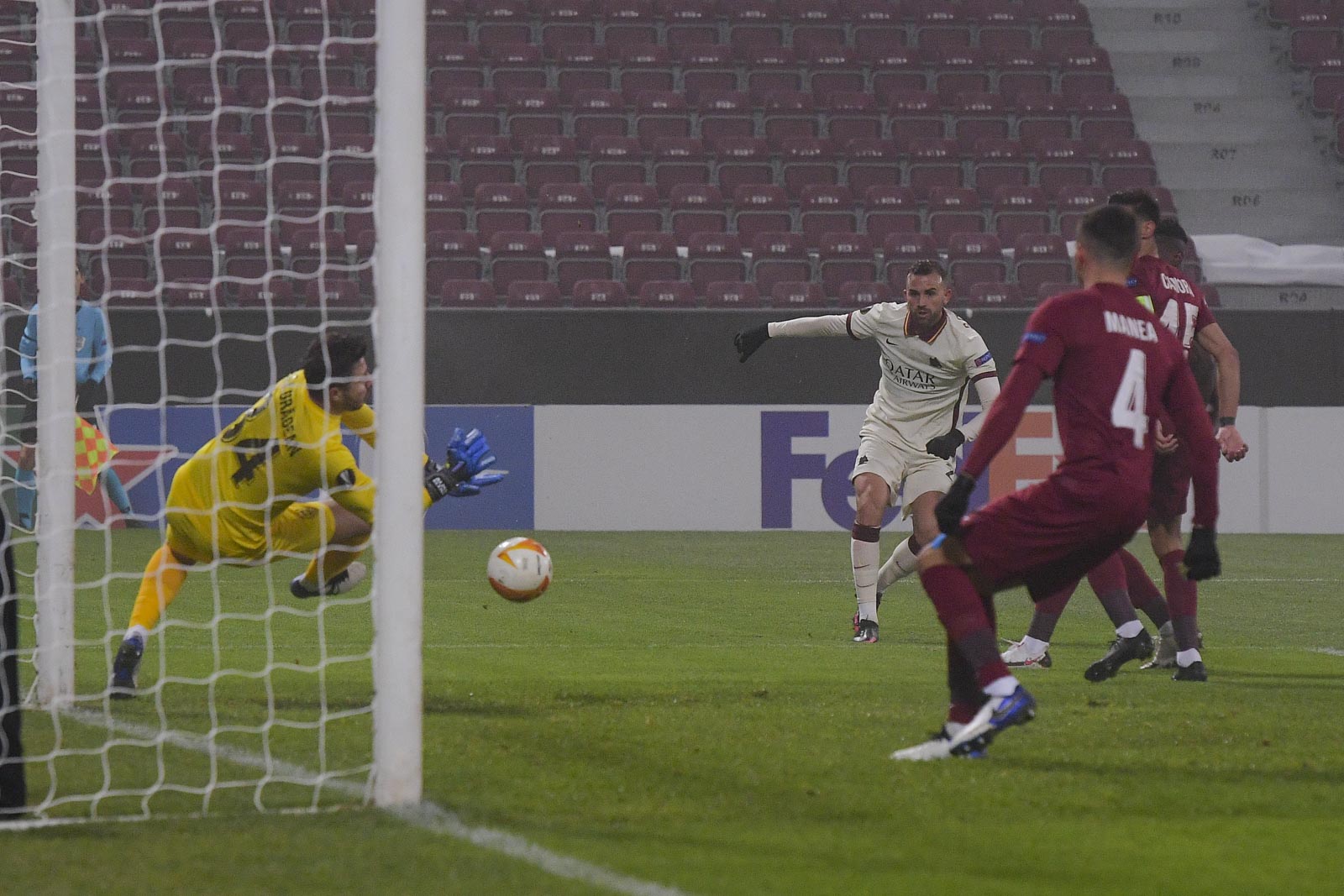 Not much took place in the first half, but Roma remained the better team primarily because of how they dominated possession nobody really threatened all that much other than the one chance change that Roma had. Roma went to the bench has Paulo Fonseca brought on Jordan veretout Lorenzo Pellegrini would be one to make room. It wasn’t a Roma performance not necessarily would have excited the team, but due primarily to the weather conditions that made it difficult. However, bringing on the French midfielder did seem to make an immediate difference in the Midfield in the 49th minute; Jordan veretout, on a free-kick, saw his strike and up into the back of the net; however, a touch by the Romanian Defender ended up as an own goal somewhat robbing a beautifully hit strike As Roma took a 1-0 lead. CFR did seem to have a little more energy in that second half as they started to take advantage of the minimal possession that they had not enough to really threaten Roma, but they were starting to challenge the goal a little bit. For the first time, Lopez was it brought into action as he dealt with a strike at his goal. Shortly after, Gonzalo Villar picked out a cross for bojar mayoral, but the Spanish striker saw his shot saved. Paulo Fonseca went to the bench again as edin Dzeko and henrikh Mkhitaryan and got a run out to the game. Leo spinazzola and bojar mayoral the ones being sacrificed. The Armenian midfielder made his impact right away before being taken out by the goalkeeper; the referee did not hesitate as he pointed to the spot. In the 67th minute, Jordan veretout stepped up, converting his strike into the Right side of a goal perfectly executed as Roma took a 2-0 lead. Roma sought the game out as they have a game in their hand; a few times, the Romanians came forward and tried to challenge Lopez, but Roma had the points wrapped up. Roma youngster Tommaso Milanese got his second appearance after playing in the match and the reverse fixture as the eighteen-year-old came off the bench. With about 10 minutes to go, Bruno Perez ruined a perfect scoring opportunity and Roma’s chance to extend their lead. With 7 minutes left, Roma teenager Tripi made his first appearance for the club Off the Bench. Cluj tried to push late, but Lopez made a save in stoppage-time as Roma got the 2-0 victory picking up all the points. They confirm their place in the Round of 32, not a pretty performance, but Roma go to Romania in poor conditions get the result. 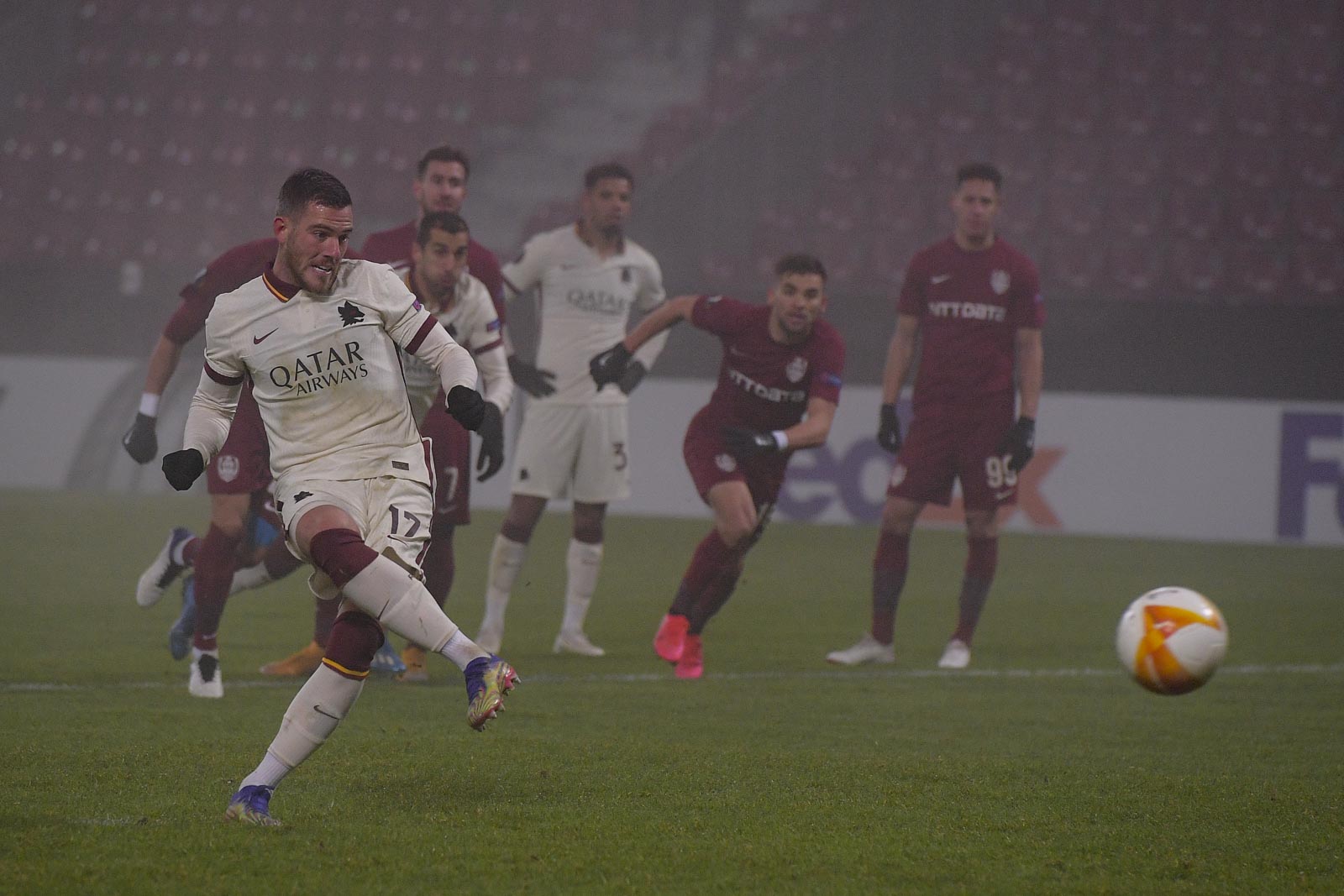 Roma go to Romania and questionable weather conditions and get the result they were looking for. While it may not have been as convincing and Roma’s 5-0 win at the Stadio Olimpico the Romans did what they had to do and got the job done. Paulo Fonseca went into this game without his backline available, with the five Defenders that he typically uses regularly. Roma had to be creative. Riccardo Calafiori got his first start of the season and only his second start total giving the 18-year-old more game time. He is a player that Roma values highly, and he will start getting more games this season now that he no longer has covid-19. In addition to that, we saw Diawara get a full game under his belt; after covid issues. Roma played at their typical Europa League Squad, and it worked out fine. They didn’t need their starters at many points in this game a sloppy or less enthusiastic first half, but they got themselves back on track in the second half when Jordan veretout nearly had a brace in the second half. A well-hit free-kick that ended up in the back of the net but a touch by a Defender took his initial goal away and then late on scored a penalty to get that go back. It was a 2-0 victory for Roma; he was largely influential in the second half allowing Roma to open up the game and be much more dangerous going forward. I wouldn’t say that Roma was incredible it was very hard and difficult considering the weather situation, but Roma managed to adapt to the circumstances getting the points while resting a lot of their key players. Roma needs to be as prepared for Napoli on Sunday. Roma go through with two games left what you’ll get more opportunities with some youngsters to play. Two teenagers can Off the Bench and played the last couple of minutes of the game. Tonight’s man of the match goes to Jordan veretout as he changed the game coming off the bench. Roma rested the players they needed and got the win; there’s not much more you can ask for.

MAN OF THE MANTCH: Jordan Veretout