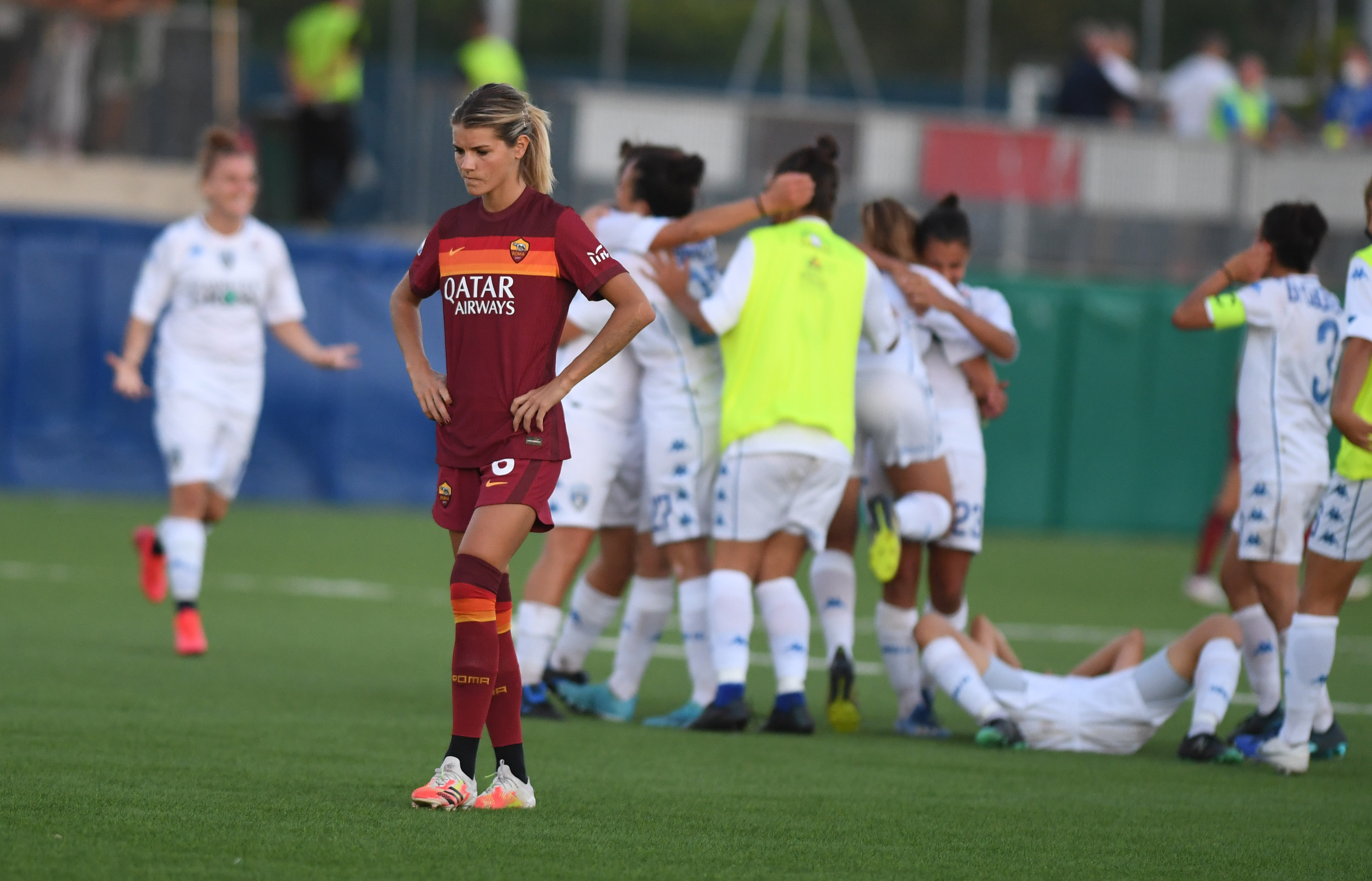 The Roma women were coming off their first victory of the season last week at home against Bari. After dropping points in their opener, they got things back on the right track. However, during those opening two-games it felt like Romo still left something to be desired. It is still very early in the season, and they’re still as a transition factor in trying to get the compatibility within the team trying to get everyone on the same page. It will be a process, but this Roma team is too talented not to start playing at a much higher level. They went on the road to face Empoli. Roma had been victorious in their previous match. But despite that Empoli is still a solid side that had the capabilities of potentially stealing points at home against a Roma team that look to make it two in a row. It wasn’t the game Roma were expecting to have. Even though there were moments, it was somewhat of a struggle. Much like many games this season with the Roma women’s team and the men’s, there was no problem in creating the chances the problem they had was putting them away. It became somewhat of a dominating performance; they looked strong early, and even though it was a bumpy road, there was reason to be optimistic in the early parts of the game. Just 10 minutes into the match Roma nearly took the lead Bonfantini tried to Chip, the Keeper as her shot hit the bar. Annamaria Serturini tried to score on the rebound, but the Empoli defense arrived at precisely the right time neutralizing the attack. Empoli had chances, but only occasionally as Roma did seem in control. However, just because of that fact, that doesn’t necessarily mean that Roma was playing particularly well. It was a sloppy performance throughout, especially given how much stronger they looked from the opposition. A little over 10 minutes after their initial chance. Lazaro retrieves the ball out of the air, hitting a half of volley with power, but it was just a little too much as her gamble misfired in the end. As both teams looked for that opening goal that felt like it was going to come in a matter of time as the opening half came to a close with a goalless draw in Empoli. Bagovonoli just made one change with Adriene Hegerberg. Despite Roma having the momentum of the game and the majority of the high-quality chances. Empoli had their moment. Three minutes into the second half Empoil would win a penalty as they take the lead from the spot pushing themselves into a 1-0 lead. Even though Roma has looked to be the better team failure to convert allows the hosts to control. Roma would make the second change bringing on Lindsay Thomas in for Bonfantini. Annamaria Serturini try to hit a sweet strike from the left side of the box. An acrobatic save denies what could have been the equalizer. The Romans continue to create chances but did not have the Killer Instinct that would be required. It was an underwhelming performer collectively. Andressa Alves came close late with a free-kick; it just seemed that Roma wasn’t going to have an opportunity to get back into the game. Then in the 90th minute, Roma get a sending-off and another penalty for Empoli. They convert from the spot and earn all three points as Roma’s inability to finish leaves a bitter taste in their mouth as they lose their first game of the season on the road in Empoli.

Creativity leads to nothing as More Wasted Chances for Roma 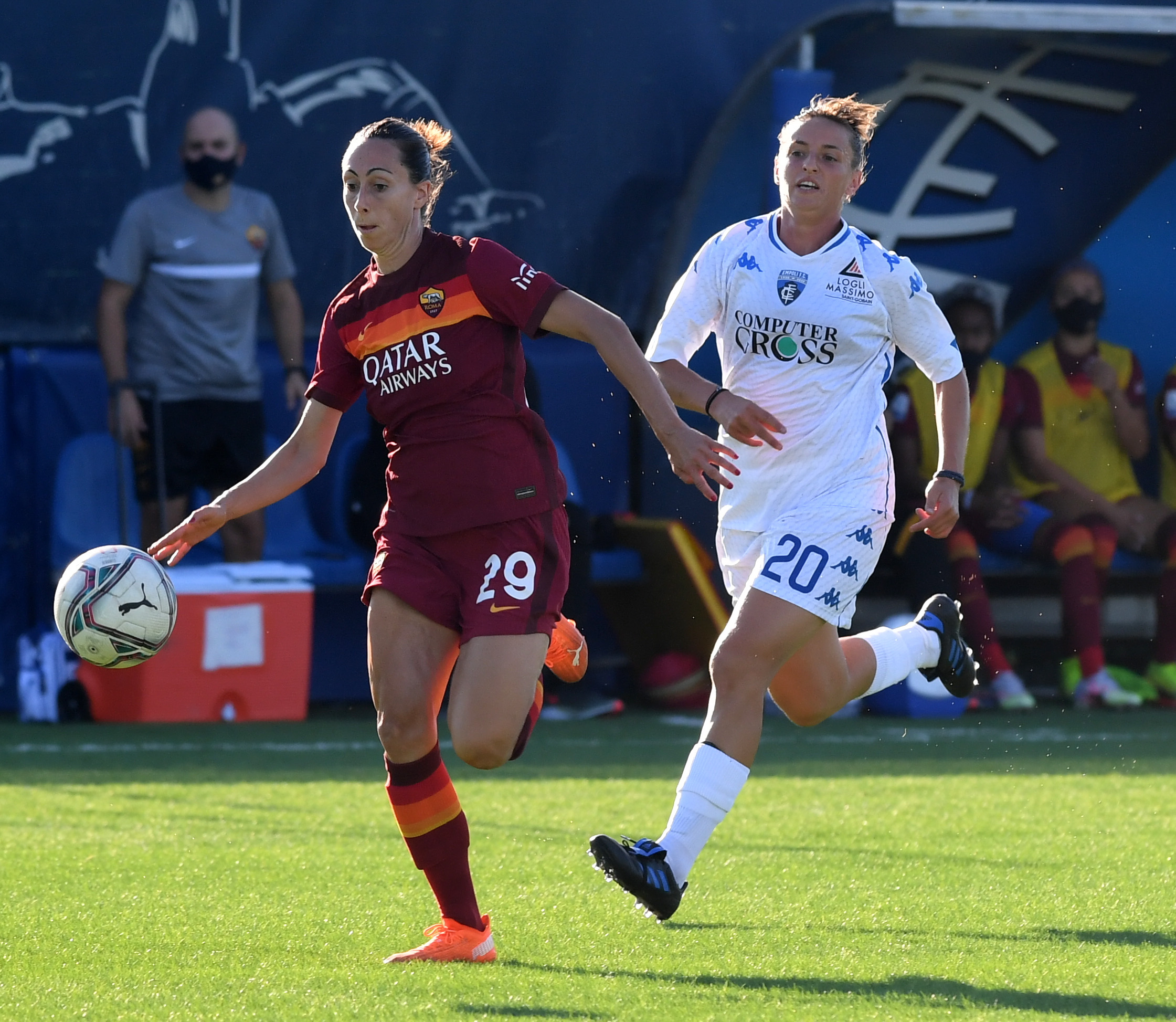 Roma continues to have similar issues in front of the goal. It is one of the things that has truly set them back and all three games. Even in the game against the Bari, two goals in the second half cause separation. Roma in all honesty, probably should have put that game away much sooner than they did. This is something that I suggested last week that they could struggle with this season if they don’t get it together. In their opening game of the season, they were significantly the better team and once again dominated the run a play but unfortunately came up short in front of the goal. The thing is this is becoming increasingly frustrating because Roma has such a strong team with so many good components. Collectively as a group against Empoli they just didn’t click. They created lots of opportunities to score, but they fell flat on their face when they got close. The inability to have that Finishing Touch in front of the goal will only worsen if things don’t improve. We’re only three games in the season a lost, a draw, and a win; it certainly could be worse, but it certainly something that Roma must work on. Once again, Manuela Giugliano was a revelation in Midfield’s center still proving to be the best in the league when it comes to Creation passing and overall control of a game. She never seems to have a bad game; the rest of the team struggles significantly in front of goal. The creation she doesn’t get the final result it deserves. She’s doing a lot of work in the Midfield only for Roma’s and misfiring Strikers to sell them short. Andrine Hegerberg has been a consistent impact Off the Bench. The Norwegian International can be used as a spark plug, but at the same time, she seems like she would be more useful in the starting lineup with those two pieces in the Midfield Roma will continue to create. The issues continue to be finishing off the chances. This is something that Roma teams always seem to deal with; the Roma women laid an egg in this game; it is something they must improve on if they want to finish in a Champions League place; this has been an underwhelming start to the season and mainly due to the fact they’re wasting far too many chances.